Bring on the Oleanders - but HOLD that Oleander Tea! 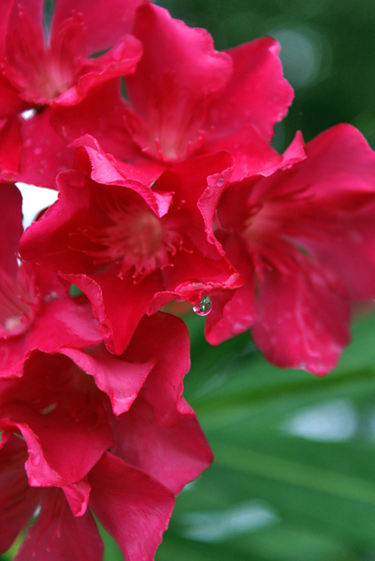 Look all around you this month, and marvel at the blooming multi-colored oleanders that you will see on nearly every street and corner.  Oleanders (Nerium oleander) are distinctive and beautiful large, flowering shrubs that thrive with little care, and grow especially well in coastal regions.  If you’re looking for something to plant around your home or business here in Bay St. Louis, these hardy shrubs can’t be beat for their beauty, their low maintenance requirements in our climate and soil, and the diversity of their uses and functions in your landscaping.

Native to the Mediterranean region, this shrub has so much going for it.  It's evergreen. It's easy.  It's tough.  It grows fairly quickly, producing 1 to 2 feet or more of growth per year.  It offers many months of beautiful flowers, blooming from spring through summer and into fall. The oleander accepts the sandy soils found in our region, and tolerates soils with salt too, so it’s really a perfect choice for coastal regions like ours.  They are very heat- and drought-tolerant once established, as well as wind-tolerant.  They are also very cold-hardy, and most varieties easily survive our dips into the freezing temperatures (they typically survive temperatures down to 15 or 20° F with little more than frost damage on the foliage).

One of the reasons that oleanders have so many landscape uses is that the plants vary from dwarfs under 4 feet tall to intermediates in the 4- to 6-foot range to those that reach 6 to 25 feet if un-pruned.  In addition, oleanders have a billowy globular shape, which you can prune to either be fuller and more compact, or taller and more rangy.  A single shrub makes a handsome specimen; while several make an evergreen hedge and very useful privacy screen. Moreover, there is a satisfying variety of colors to choose from, in either single or double flowers, to best fit your landscaping:  from white to yellow to pale blush pink to peach to bright pink, coral or red.  To help you pick the right oleander, ask your local nursery, and/or contact the International Oleander Society, http://www.oleander.org.

Planting.   When choosing your locations for planting, bear in mind that full sun is best for the most prolific blooms; oleander will thrive in partial shade also, but with fewer blooms.  Also, oleanders are tolerant of many different soil types, but must have good drainage.  They will not do well in wet areas. Dig a hole for each plant two to three times the diameter of the container or root ball.  This allows for back filling soil into the planting hole with a minimum of disturbance to the root mass.  The hole should be only deep enough to keep the plant at its original level in the container.  Plants should be thoroughly watered soon after installation.

Maintenance.   Oleanders, once established, are known to survive with a minimum of care when planted into the landscape.  (That’s great news for all of us who don’t have a lot of free time for watering and fertilizing.)  However, bear in mind that a newly planted oleander requires more care and watering than an older one, to get it started.  And, while oleanders do tolerate drought, it’s better to keep them watered through dry periods, for constant growth and more continuous flowering.  Oleanders require little fertilizer, but plants with light green foliage and /or few flowers may benefit from an application of a balanced fertilizer in early spring and another in early fall.

Pruning.   Oleanders are very easy to prune. Pruning will reward you with a strong, healthy plant with lots of bloom. Prune them after they have stopped blooming and while they are dormant.  We are fortunate enough in this area to have a very long bloom time for oleanders.  Some oleanders don't want to stop blooming, so you may just have to grit your teeth and cut off the flowers if the plant is in need of pruning.  Here is how the procedure goes:  Oleanders should be cut back just above the leaf nodes. This is the section where three leaves come out of the branch. By cutting it here, you will be forcing new branching at each of the leaf nodes (joints). You will therefore get three new branches coming from the section which once had three leaves. .  Broken, weak, crossing or dead branches should be removed.  An unwanted stem may be removed at ground level or where it joins an older stem.  Older oleanders may get woody and bare at the bottom. Rejuvenate them by cutting off 1/3 of the oldest trunks at ground level.  A rule of thumb is not to prune more than a third of the existing foliage and to carefully prune stems so that removal is evenly distributed for a balanced look.  Oleanders really don’t require very much pruning to maintain their beautiful shape.

But – isn’t it poisonous?

Historically, oleander has always had a pretty wicked reputation.  It does contain oleandrin, a cardiac glycoside that brings on nausea and vomiting, severe weakness, irregular pulse, and a decreased heart rate, and could lead quickly to death.  The sap is poisonous to humans and animals throughout all the parts of the oleander plant, if it is ingested.  Despite this, few people or pets get poisoned, because the leathery leaves and stems are thoroughly unappetizing (unless you're an oleander caterpillar.)

The plant is closely associated with both murder and suicide in both literature and the medical record.  One woman Death Row inmate in California actually killed her husband with oleander.  Attempting to collect on his life insurance, she put oleander leaves in his food.  Severe gastrointestinal problems put him in the hospital, yet he survived to live another day.  (Unfortunately, while he was recuperating, she finished the job by offering him an antifreeze-laced glass of Gatorade!)  According to Amy Miller in "Wicked Plants: The Weed That Killed Lincoln's Mother & Other Botanical Atrocities,” oleander-related suicide attempts turn up regularly in the medical literature; particularly among nursing-home patients who try to ingest the mashed up seeds from oleander plants found in the landscaping.  It has also become a common form of suicide in India and Sri Lanka.

Accidental ingestions have also killed.  In 2000 two toddlers in Southern California were found dead in their cribs after chewing on the leaves.  Also, oleander’s reputation as a plant with potential medicinal uses has caused some seriously-ill people to attempt to make an oleander soup or tea to try to cure their ailments – DO NOT DO THIS.

Use caution around oleander, but you don’t need to overreact to its toxic reputation.  Remember, many other common Southern landscaping plants are poisonous, including sago palm and privet (Ligustrum).  Don’t toast your marshmallows using oleander sticks for skewers, don’t burn the branches at all (you won’t want to inhale the smoke, and you especially should never throw it on a cooking fire).  And try to keep the sap off of your skin when you prune, because it could be irritating to sensitive skin.  As for animal poisonings, don’t let your pets eat at the shrubs, if you notice them doing that.  Wikipedia reports that eating the leaves can be lethal at low dosages, and that cases of sheep lethality have been reported from only a single leaf.  However, “because the leaf itself is quite bitter, only starving animals will be likely to eat the plant.”  (That must be why our dog stays away from it, preferring the sweet tender shoots of weeds all over the yard.)

Oleander is a Southern tradition, no more so than here on the Gulf Coast, so enjoy adding them liberally to your landscape projects.