While February may be a dreary month in most of the country, on the Mississippi Gulf Coast, the good times roll.  The official Mardi Gras season lasts for weeks and Bay St. Louis is a hub of activity.  The February Second Saturday Artwalk falls on the 9th - shortly before Mardi Gras Day (Feb. 12th) and Valentine’s Day, so it’s a day of carnival merry-making, as well as a celebration of sweethearts.

This year, the day opens with Mardi Pardi, a 5K/10K Run/Walk through Bay St. Louis – with many of the participants wearing costume (go to www.mardipardiadventure.org for complete details).  The after-party begins at 10am at the Mockingbird Café, with live performances from top Gulf Coast performers, like Minutehead and the Irene Sage Band.

While Old Town will be lively all day, the Artwalk officially kicks into high gear from 4pm – 8pm, with gallery openings, shop specials and live music on the streets.  To add to the festivities, each month, two merchants are designated as  Second Saturday “Hot Spots.” This month, the spotlight falls on two relatively new shops which have already made their mark in Old Town.

For complete details on the February Second Saturday, go to www.baystlouisoldtown.com 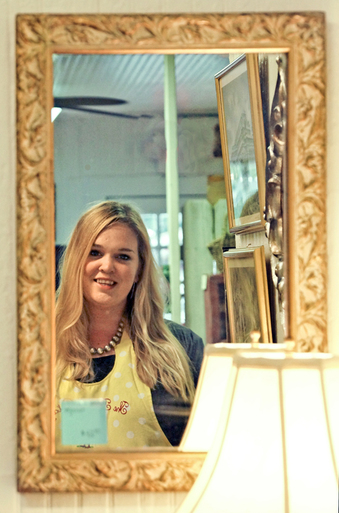 The French Potager, at 213 Main Street, carries a fascinating array of antiques, gifts, plants and accessories for home and garden.  The shop is the brain-child of Martha Whitney Butler.  Butler may be one of the youngest shop owners in Old Town, but she’s also one of the most savvy – and probably has more business experience than many corporate executives.

The daughter of antique dealers in Birmingham, Butler’s opened her first shop in a  prestigious antiques mall when she was only 16 years old. By the time she entered college at Ole Miss, she’d already been on antique buying trips to Europe and was a veteran at hunting for bargains in Parisian flea markets.  While earning her degree in art history and English, she earned pocket money by ferreting out collectibles from thrift stores, then reselling her finds to antique dealers.

Working at the Birmingham Museum of Art, Butler learned the nuts and bolts of running a museum, then in 2009, visited Bay St. Louis for the first time to apply as manager of the Alice Moseley Museum.

“I fell in love with Bay St. Louis instantly,” says Butler.  “I didn’t want to leave and ended up moving down the next weekend.”

She fulfilled her dream of opening her own Old Town shop late last year, with the goal of being “the cutest darn thing on Main Street.”   Potager (pronounced Po – ta –zhay)  is the French word for a kitchen garden filled with edible herbs, vegetables and flowers.   Potagers are delightful to the eye, yet useful – just like the things in Butler’s classy cottage shop.  This boutique for the home is filled with curiosities and oddities, along with room-making accents and furniture.  Butler’s personal touches, like lighting fixtures she creates from antique fans and heating lamps, make the casual browser to wake up and take note.

For Second Saturday, The French Potager will feature refreshments and live music by the Oak Street Boys.  Butler also has a special on Valentine’s Day plants  - “the gifts that keep on living.”  Butler’s applied her magic touch by wrapping tulips, iris, hydrangas, and cyclamens to bring delight to the sweethearts in anyone’s life.

“By living and having a shop in Old Town,” says Butler, “I feel like I’m a part of some great movement, the revitalization of Bay St. Louis.  It’s coming back.  It already looks so different than it did when I moved here three years ago.” 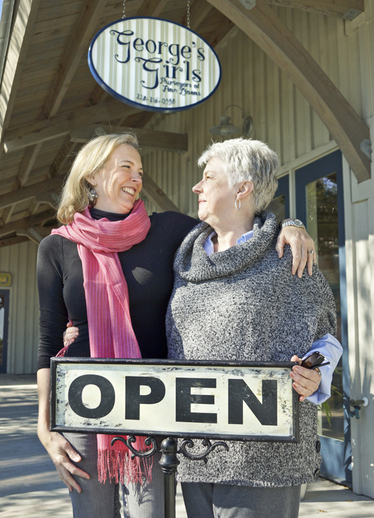 Perhaps some of the biggest changes in the last few years have occurred on the Old Town beachfront, with the completion of the seawall and new buildings and businesses appearing.  The striking French Settlement building next to Hancock Bank has become a new beachront landmark and is home to several new shops.

George’s Girls moved into French Settlement (108 South Beach, Suite B) just last summer, expanding from a smaller Old Town location.  “Purveyors of Fine Linens” is the shop’s tag-line, yet co-owner Laura Lucore points out that they carry all types of products to “make your home luxurious and to pamper yourself.”

There are actually four women who refer to themselves as “George’s Girls.”  At the helm of the enterprise is Ann Yarbrough, with her three daughters Laura, Jennifer, and Karen.  Ann’s husband, George was an engineer and the family traveled all over the world, eventually winding up in Waveland, where Ann’s parents had a home that had always been an anchor.  The elder Yarbroughs became real estate partners there until July, 2011, when during a family vacation in Michigan, George passed away suddenly from a heart attack.

“To honor his memory, we decided to do what the four of us do best – and that’s shopping,” says Ann, with a smile.

Ann and Laura Yarbrough Lucore (who lives in Waveland), are the store’s mainstays, with Jennifer and Karen coming into town often, working in the shop during their visits.  The four regularly storm the  wholesale markets in Atlanta, going their separate ways in the three cavernous buildings filled with merchandize.  Returning to their hotel room at night, they compare notes, deciding together what they’ll order for the shop.

This quartet of seasoned shoppers look for items produced by smaller family-owned companies, made with exceptional quality.  For instance, elegant sleep and loungewear has become some of the shop’s biggest sellers.  Versatile separates designed by PJ Harlowe and made in California are comfortable enough to wear to bed and stylish enough to greet company.  And with fragrances, soaps, lotions, and fine bedding, George’s Girls stocks everything to transform a house into a haven.  And what they don’t stock, they can order.

When the young business grew more quickly than any of them anticipated, the expansion into French Settlement seemed a natural.  As Laura Lucore points out, “I get to work in this beautiful jewel all day, with light, and massive wood beams and a view of the water and beach.”  The business is garnering more regular customers each day, while the family is growing closer with the common project.  Ann Yarbrough is the first to admit that her husband never enjoyed shopping himself, but she’s quite certain that he’d definitely approve of the store that bears his name.