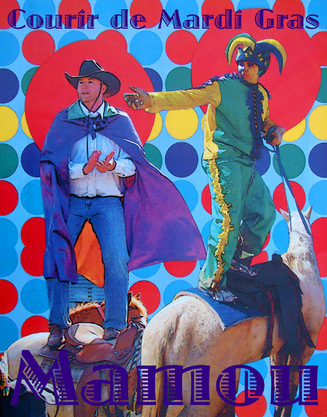 We’re all familiar with the sights and sounds of a typical New Orleans Mardi Gras, but what goes on outside the boundaries of Esplanade and Canal streets? Farther out in the Cajun countryside of Mamou, Louisiana, one Gulf Coast artist discovered a Mardi Gras that’ll have you tripping over your roots.

Way down south in Louisiana lies the small town of Mamou, population roughly 4,000. The town is flooded by hundreds of visitors each year that come to view its take on Mardi Gras festivities. The traditional parade boasts an all-male troupe with unmasked capitaines and masked revelers that travel both on horseback and on foot. Coming closest to the more familiar Mardi Gras celebrations, this tradition is of cultural importance because it has been recently revived by the inhabitants of Mamou. Visitors and locals gather on the main stretch in anticipation of the parade, reminiscent of a cavalry of clowns on their way to the circus. The band of beggars colorfully cavalcade through the countryside, halting at houses and releasing chickens, which they inanely collect and tow for the duration of the celebration. It’s no wonder that upon her first visit to Mamou, artist Lori Gordon was motivated to have another rendezvous with the Courir de Mardi Gras, this time with camera in tow.

Gordon is a mixed-media artist residing in Bay St. Louis, Mississippi. Originally from the Northern Plains, she moved south and west, living in the Black Hills of South Dakota and the deserts of Arizona. She received a bachelor’s in political science and a master’s in religious studies, all the while pursuing her love of art. Her work is featured in galleries and universities all over the country and also in the permanent collections of private collectors, including two U.S. presidents, museums in South Dakota, and the Smithsonian Institution. Gordon is essentially self-taught and willing to explore all mediums from scraps and debris used in the Katrina Collection to digital image distortion and collage used in her series Courir de Mardi Gras Mamou, LA.

In February 2010, Gordon traveled to Mamou for the second time to embark on her adventure de Mardi Gras. The experience she had was vivid, colorful, and most importantly, documented. She got a behind-the-scene look at Courir de Mardi Gras bright and early at five o’clock in the morning. Greeted by an a.m. accordion and the crisp snapping of beer cans opening, Gordon felt the anticipation in the air. By nine a.m. the parade was gathered and rolling, largely fueled by cheap beer and year-long anticipation. The audience of fools was led by their caped capitaines, riding on horseback from house to house, stopping each time to release and run down a chicken or two. Gordon followed the parade and captured shots of daring feats on horseback and candid moments of a jovial celebration unfolding around her.

The jubilant parade continued with the masked men dancing, drinking and splashing in puddles along the route. They danced with each other, the crowd, their chickens, and Gordon, who found them to be delightful, jolly gentlemen. Her fondness for the affectionate comedians was captured on canvas where they are revealed to be not only entertaining, but also driven by a strong sense of community and camaraderie.

Their pieced-together costumes represent the ideals of a deep tradition and stand as symbols of the patchwork of cultures that, when stitched together, comprise the very fabric of Mardi Gras. Gordon captured this essence as she pieced together her collages.

Starting from a photograph, she digitally altered the image by saturating it with color, purposely making them brighter than they actually were to convey excitement, action, movement and celebration. She then took her images and pieced them together on a blank background and filled in sections with color. After completing this process, she applied the image to canvas and began applying mixed media elements such as paper confetti cutouts and paint. The images, being exciting action shots themselves, stand out in the foreground. They are surrounded by exhilarating and colorful paper cutouts and diamond-shaped patterns reminiscent of French harlequins that further express the sense of carnival. The geometric shapes surrounding the pictures seem to bring them to life and fill the square canvas with movement, accurately reflecting the excitement occurring at the time the photo was taken.

At the end of the parade, participants gather to celebrate the cooking of the festive gumbo. Originally, they would use the ingredients gathered at homes along the way, including the chickens. Presently they cook the gumbo during the parade and it is ready for feasting by the time the riders get to the end. It’s safe to say that no chickens were harmed during the making of this Mardi Gras, just slightly tormented for the day. The riders and participants are greeted with traditional Cajun music playing la Chanson de Mardi Gras, of which Mamou has its own version. To continue the celebration, the crowd flocks to the famous Fred’s Lounge where they enjoy more dancing and live Cajun music all day.

Even though it is as far away from Bourbon Street as you can imagine, the energy that is released from this traditional celebration is certainly comparable. Lori Gordon’s colorful depiction of this cultural event conjures a familiar, child-like anticipation for the upcoming Mardi Gras season and acts as a hand reaching out and tossing you a chicken and a bon temp.

Call to artists: If you are a member of The Arts, Hancock County (or interested in becoming one) and would like to see your work featured in an article, please email Martha Whitney Butler at mwbutler24@gmail.com.