As candidates make their way along the campaign trail, they leave us with many things. Some leave us with a wonderful impression, a kiss on a baby’s forehead, a friendly handshake, a genuine smile, and often times a token that we will boast to reinforce our ideals and faith in them. These tokens may come in the form of a button, a t-shirt, even a sign placed in the yard. Could you ever imagine that these objects may one day be valuable?

Over time, campaign memorabilia has become widely collected. Of course collectors seek out the oldest, rarest, most controversial pieces, but that sign in your yard could be valuable one day.

These articles of history were often handed out to the public or at private conventions by teams of supporters for specific parties or candidates. Items that have been collected give us a glimpse of the platforms of these parties and candidates, sometimes carrying immense shock value to our present-day population.

Campaign buttons made an appearance at our first presidential election. The small brass buttons read “G.W.-Long Live the President”. Even though there was no general election surrounding his appointment, people were very eager to collect any memorabilia concerning this historic event. By the 1820s, elections were open to American citizens thus trending the wide distribution of campaign buttons and lapel pins.
Posters, banners, and buttons familiarized the public with their choice of candidates by using campaign slogans. These slogans usually gave people a pretty good insight into who the candidate was and the political platform upon which they stood. A famous example of a historic campaign slogan is "Tippecanoe and Tyler Too" which was used for William Henry Harrison and John Tyler of the Whig Party. Their party generated fervent support with parades, political rallies, and souvenirs that were intended to get them elected. These trinkets were well-received by the electorates and became a proven tactic that is still used today to gain votes

The next time you visit a national convention or receive a pin from a campaign supporter, think of it as being handed a piece of history. Even if you don’t like Ike, these small tokens of support may one day be worth big bucks. 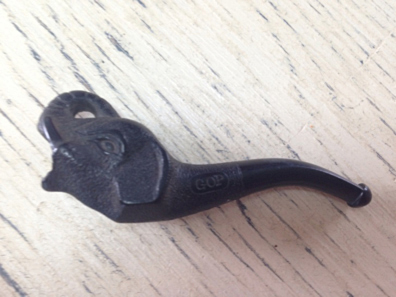