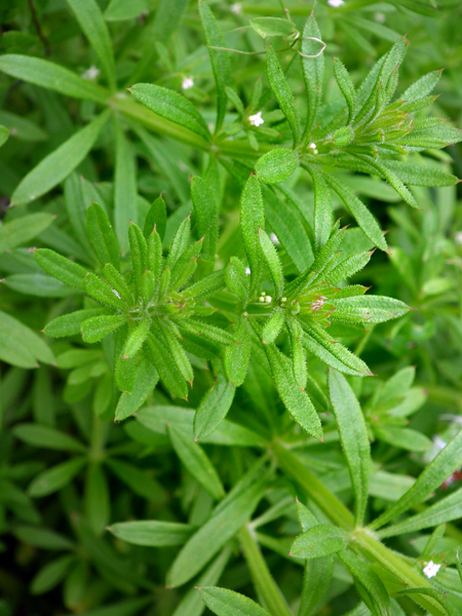 Along with spring’s budding leaves and bounteous blossoms arrive a few phenomena that we are somewhat less enthused about observing:  the persistent spread of noxious and invasive weeds across our gardens.  At this time of year, certain weeds appear to be covering supernormal amounts of ground each day.  But a little know-how and perseverance can keep them under control so that the rest of your yard or garden can flourish.  See Part I:  Smilax:  Nothing to Smile About in the July 2011 issue of the Cleaver.  [insert Link?]

The plant commonly known as Catchweed Bedstraw (scientific name Galium aparine) is a good plant to discuss this month.  This fast-growing plant in the madder family (Rubiaceae) is native in all US states except Hawaii.  Catchweed forms dense, tangled mats that sprawl on the ground or over other vegetation.  It grows in a variety of habitats, including forests and woodlands, meadows, prairies, disturbed areas, and cultivated crops.  More than likely, you’ve seen it in your yards, beds, fencelines, and empty lots every year since at least 2006, the first spring after Hurricane Katrina.  (I’ve heard some people comment that they had never noticed this particular weed until after storm waters washed strange new seeds through town).

Each spring, I rip out bagfuls of this sticky annual weed with whorls of leaves along its lanky square stems.  Galium aparine is a herbaceous annual weed with a number of interesting common names.  The species name “aparine” comes from a Latin word meaning “to seize,” derived from the clinging nature of this weed.  The plant’s many common names derive from the fine hook-like hairs or prickles (similar to Velcro) on its leaves and stems, that readily adhere to clothing and animal fur.  Some of its common names are catchweed (because it catches things), “cleavers” (because it “cleaves” or clings to people), “grip-grass,” “sticky-willy,” “sticky-weed,” and “Velcro-plant.”  It is also known as bedstraw or “Lady’s bedstraw,” from its use as a mattress filling.  Apparently, in the old days, it used to be used as stuffing in mattresses because the clinging nature of the prickles minimized matting and compaction of the mattress-filling (and, when dried, it gave off a nice fresh scent that the ladies liked to lay their heads on).

Interestingly, this plant also supposedly has many medicinal uses (as a diuretic, an anti-inflammatory, fever reducer, removing tumors, treating psoriasis and eczema, etc.). Native Americans used an infusion of the plant to relieve itches and poison ivy. The dried and roasted fruits can be used to make a coffee substitute (this plant is in the same family as coffee).  The young leaves can be used as a substitute for herbal tea, or steamed with butter and eaten, and can even be eaten raw.  (I’ve read about these uses; I haven’t tried any of these delicacies at home.)  The plant has also been used to feed geese and donkeys, and apparently some dogs can’t get enough of the sticky stuff either.

Seeds germinate very early in the spring, to produce a gangly plant with long stems. This fast growing weed can flower in as little as eight weeks after germination, bearing tiny, inconspicuous pale green or white flowers.  Once pollinated, little spherical fruits are produced, containing a small seed.  The seeds are covered with hooked bristles, creating a burr, which is easily dispersed on animal fur or clothing.  The little burs cling to everything that passes through – your clothing, your pets, birds — and it keeps the weed spreading.  Plants can grow up to 6 feet, but can’t stand up on their own, so they often use other upright species for support, clambering over other vegetation with the aid of hooked bristles on the stems.  Left on their own, they remain low and sprawling, forming dense tangles only a foot or so in height, shading out any smaller plants they grow over.

Though it is almost pretty in its own way, and has a rather pleasant crisp fragrance, like fresh-mown hay, it is a nuisance – make no mistake about that!  In landscapes and home gardens, catchweed competes for nutrients, water, and light with desirable plants.  Competition for resources aside, overgrown catchweed just isn’t very pretty in your garden beds or yard.  It can also be a serious nuisance in some cases by smothering desirable vegetation and causing physical injury to small plants.  It makes the harvesting of fruits and vegetables difficult, as the tangled stems weave throughout the garden. It causes problems in crops during harvesting when the catchweed becomes tangled with the crop or equipment.  For pet owners, bedstraw seed or vegetation often gets caught in the fur of pets and can be difficult to remove.  And, like all noxious weeds, every week that it goes uncontrolled makes it that much harder to eradicate.  (Individual plants typically produce 100 to 400 seeds, with occasional plants producing 3,000 or more seeds.  Those seeds, with their hooked hairs, can remain viable in the soil for up to three years and can survive passage through the digestive tracts of cattle, horses, pigs, goats, and birds.)

Long-term control of catchweed bedstraw in home landscapes relies on removing existing plants before they flower and produce viable seed.  The weed really is not too difficult to control if pulled or hoed out while young and small, before it flowers and goes to seed.  Catchweed has a shallow root system, and is very easy to pull up in great masses, as its attachment to the ground is extraordinarily light and sticky.  (It’s even easier sometimes to just rake it up.)  When you pull it up, it sticks to itself into a big sticky fragrant ball, which is easy to crush into a small compact ball and throw away.  However, its brittle stems are connected loosely, and break so easily that it is difficult to remove an entire plant intact; the roots often remain behind (and can grow again) when the tops are pulled.  That just means that a little more vigilance is required – even though you may have just weeded the same area last week, you may have to still go over it a few more times.  Just keep ripping and ripping until it gives up for the summer.

Mulching can also help keep catchweed under control by reducing seedling emergence and easing the removal of plants that do become established.  Chemicals really aren’t necessary to control this weed, but pre-emergent herbicides like Preen and post-emergent herbicides such as glyphosate (Roundup) can also aid suppression.

Catchweed’s scratchy hairs and sticky sap can be mildly irritating to those with sensitive skin, and some people have reported allergies to the plant, so you should remember to wash your hands and arms after you’ve handled it.  (Gloves are not necessary unless your skin is highly  sensitive to it).

Weeding is a great excuse to get out and ramble around your yard and garden, looking at the birds and insects, and all the new exciting growth of spring.  Happy weeding!