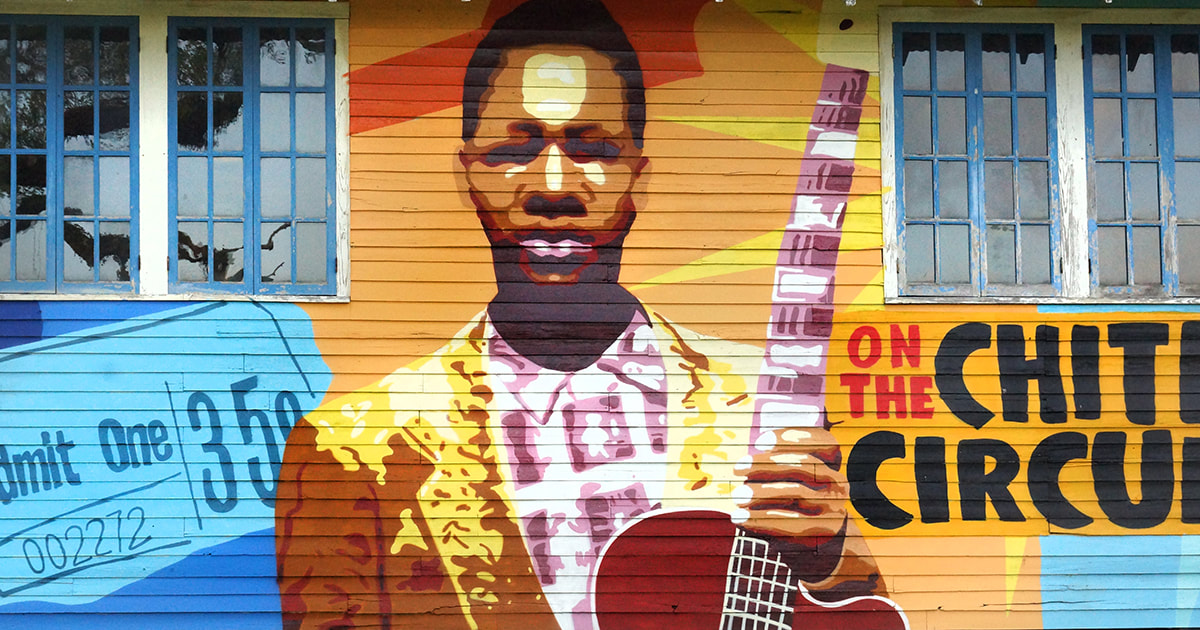 Some of the most Instagrammable sites in Bay St. Louis have their origins in black history and culture.  Take a tour and learn more about the city's fascinating past!

Keep an eye out for Part 2 in the coming weeks!
​ 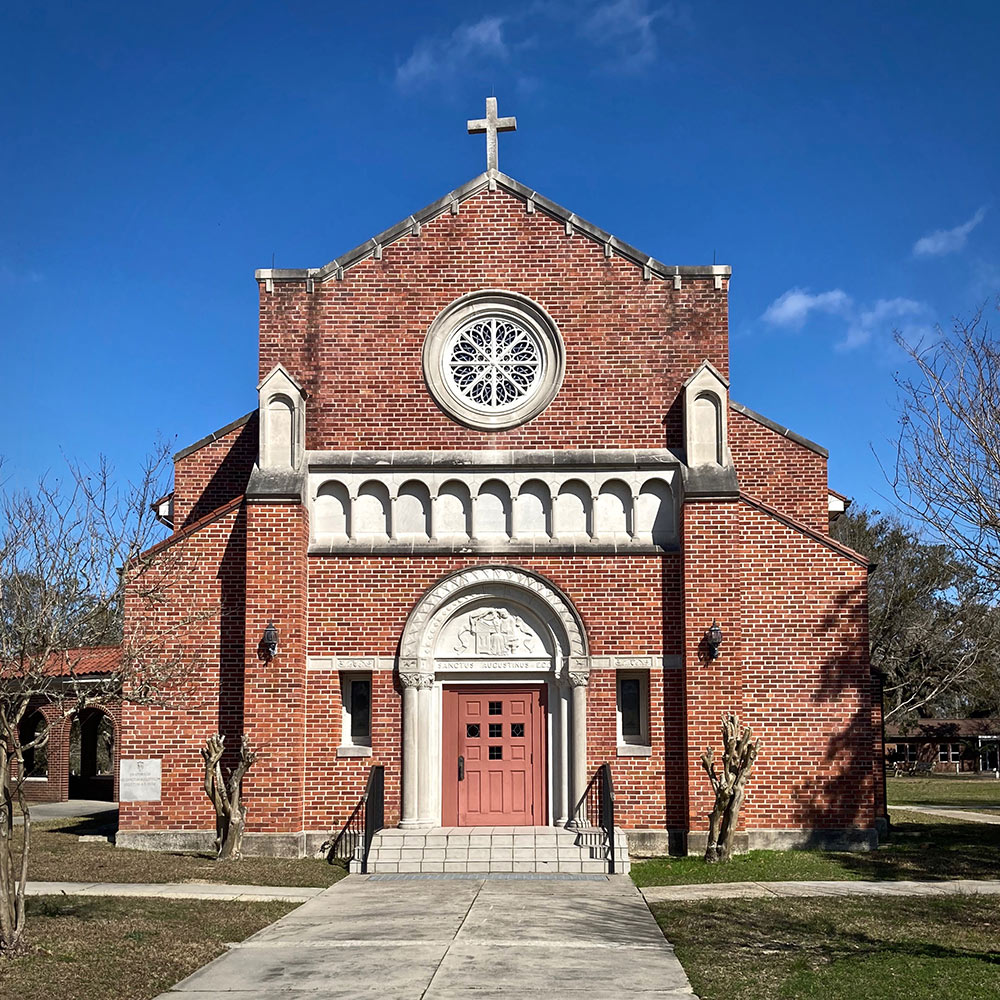 St Augustine Seminary, founded in 1920 in Greenville, Mississippi, became the first seminary in the United States to accept Black men into the Catholic teachings of priesthood and religion. The seminary had 14 students by the end of its first year.

​With constant threats from white supremacists, the seminary moved to Bay Saint Louis in 1923. In May of 1934, Fathers Anthony Bourges, Maurice Rousseve, Vincent Smith, and Francis Wade became the first Black men to be ordained into the Catholic priesthood in the United States. The seminary now functions as a home for retired priests with the Society of the Divine Word and a retreat center.

To photography the lovely church and fascinating grotto, use the Ulman Avenue entrance to the parking lot.  You can photograph the font view of the church, then head down a short path to the right of the church to visit the grotto.  If you’d like to see the inside of the lovely historic church, mass is held at 9am each Sunday.  Visit their website for more information. 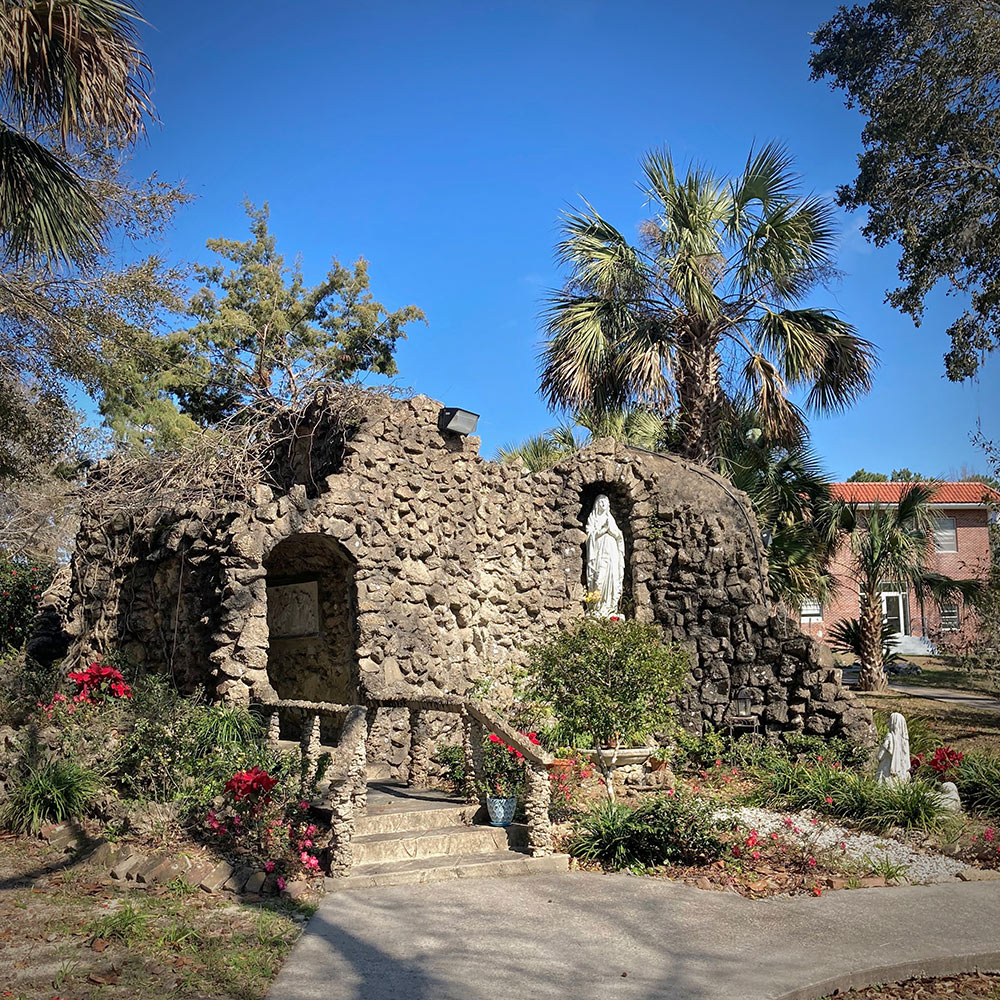 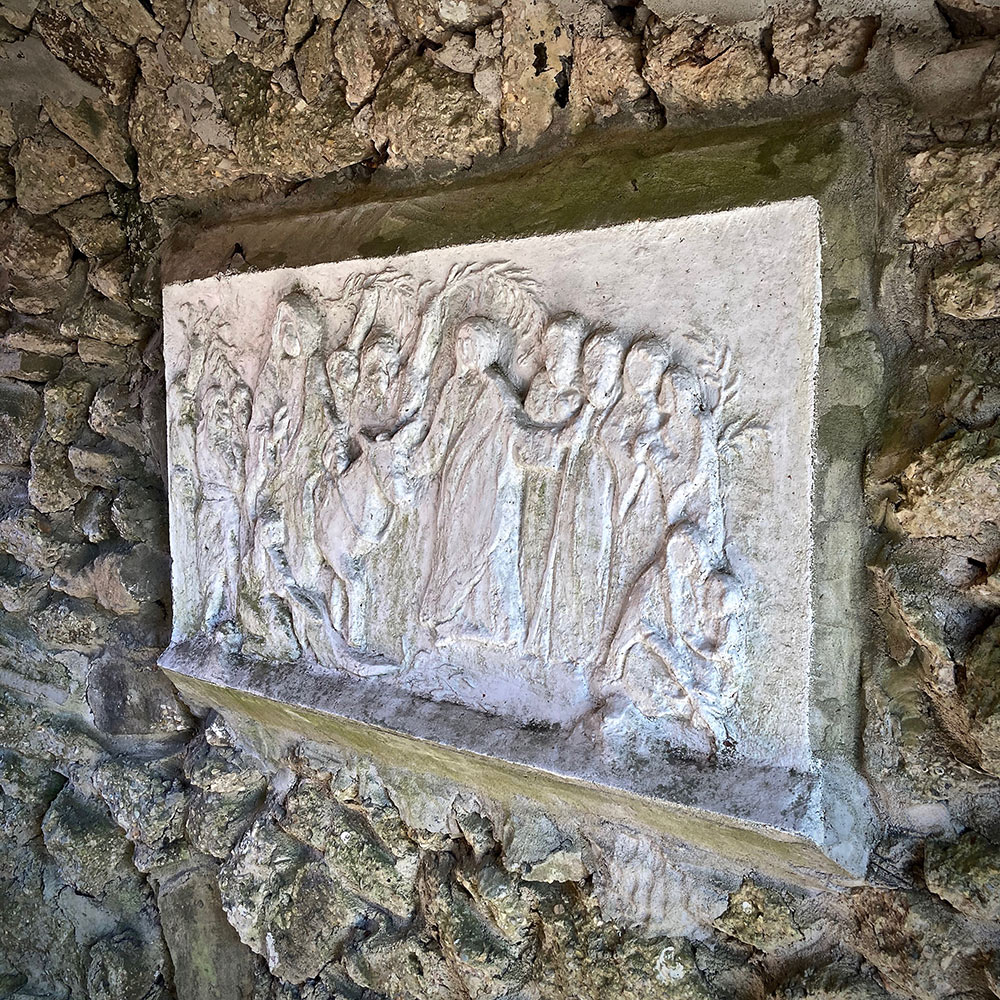 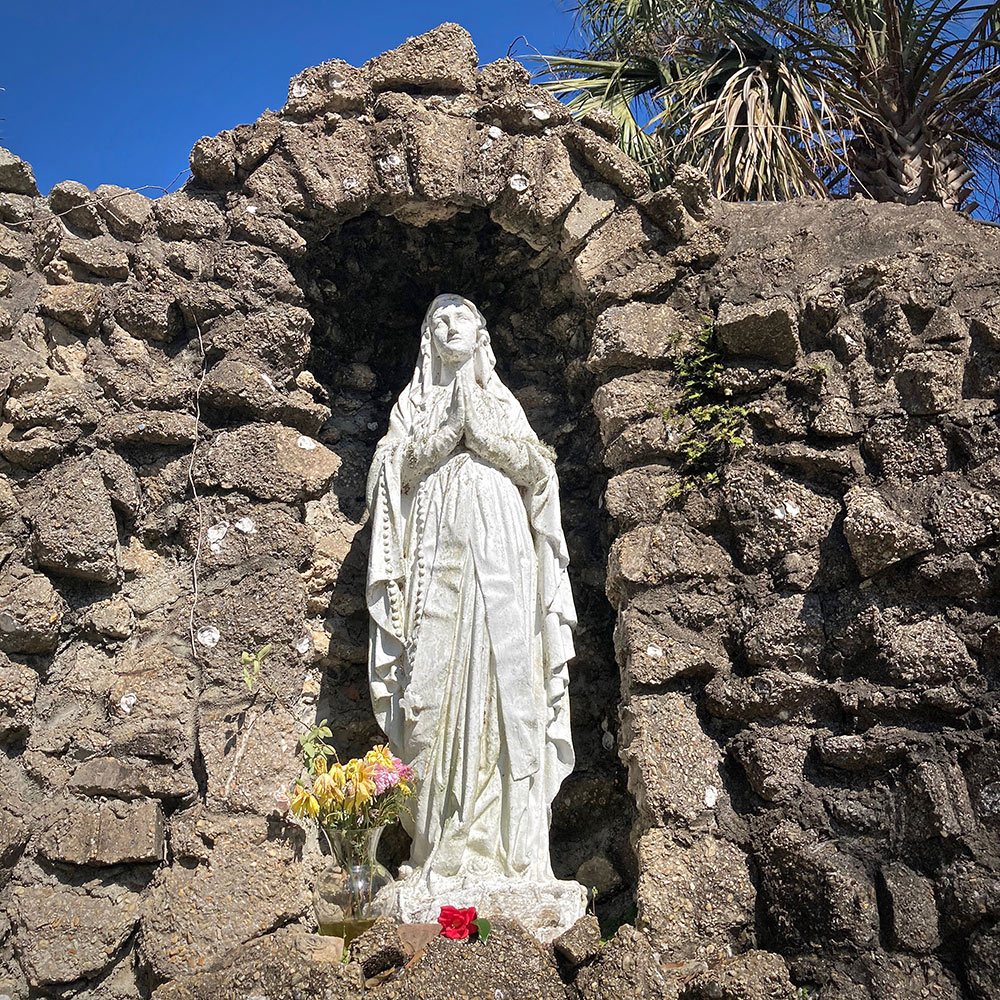 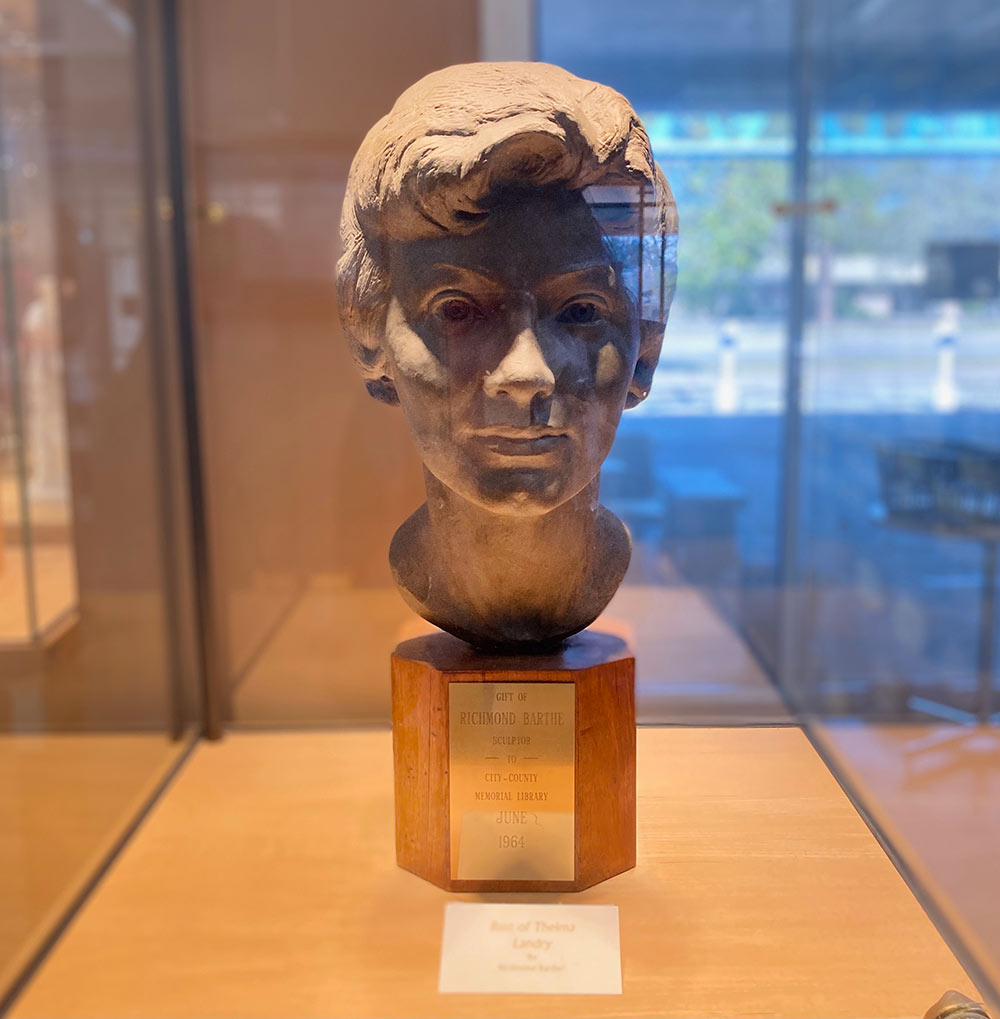 In a 2018 episode of Antiques Roadshow, one of Richmond Barthé’s sculptures is appraised in the $15,000 –$20,000 range.  The appraiser reels off the “fact” that the artist was born in St. Louis, but actually, Barthé grew up in Bay St. Louis, where he became a lifelong friend of the Labats, an influential local family (Inez Labat, his fourth-grade teacher, encouraged his artistic inclinations).

Barthé went on to study at the Art Institute of Chicago and became a noted figure in the Harlem Renaissance.  You can read more about him in this 2019 Shoofly story by Edward Gibson.

Richmond Barthe's nieces still reside in Bay St. Louis. His sister was Louise Williams, she was married to Douglas Williams, the first African American police chief in the state of Mississippi. Tina Williams, Barthé, niece still owns several of his pieces that were on loan to the library until 2017 and are now on loan to Xavier University.
​
The Bay St. Louis Library proudly displays one of Barthé’s original sculptures, a bust of Thelma Landry, created in 1964.  Ask at the desk and they’ll steer you toward an astonishing binder filled with all things Richmond Barthé – from letters to newspaper clippings to ads for his exhibitions.  Dive in and immerse yourself in the life of this remarkable man. 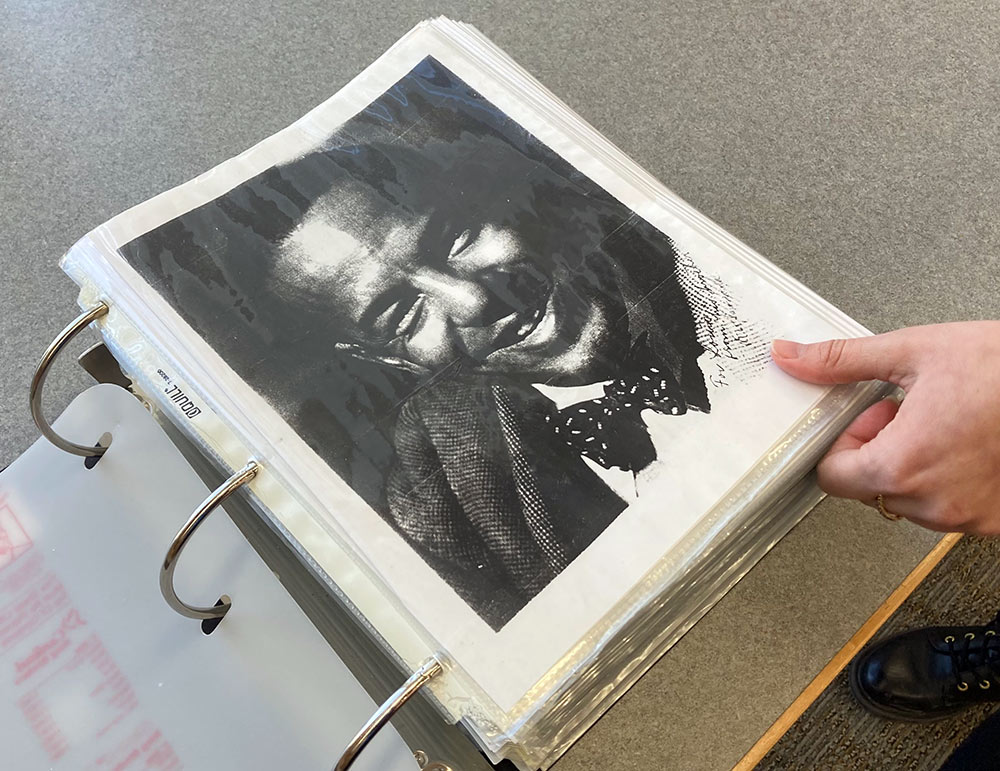 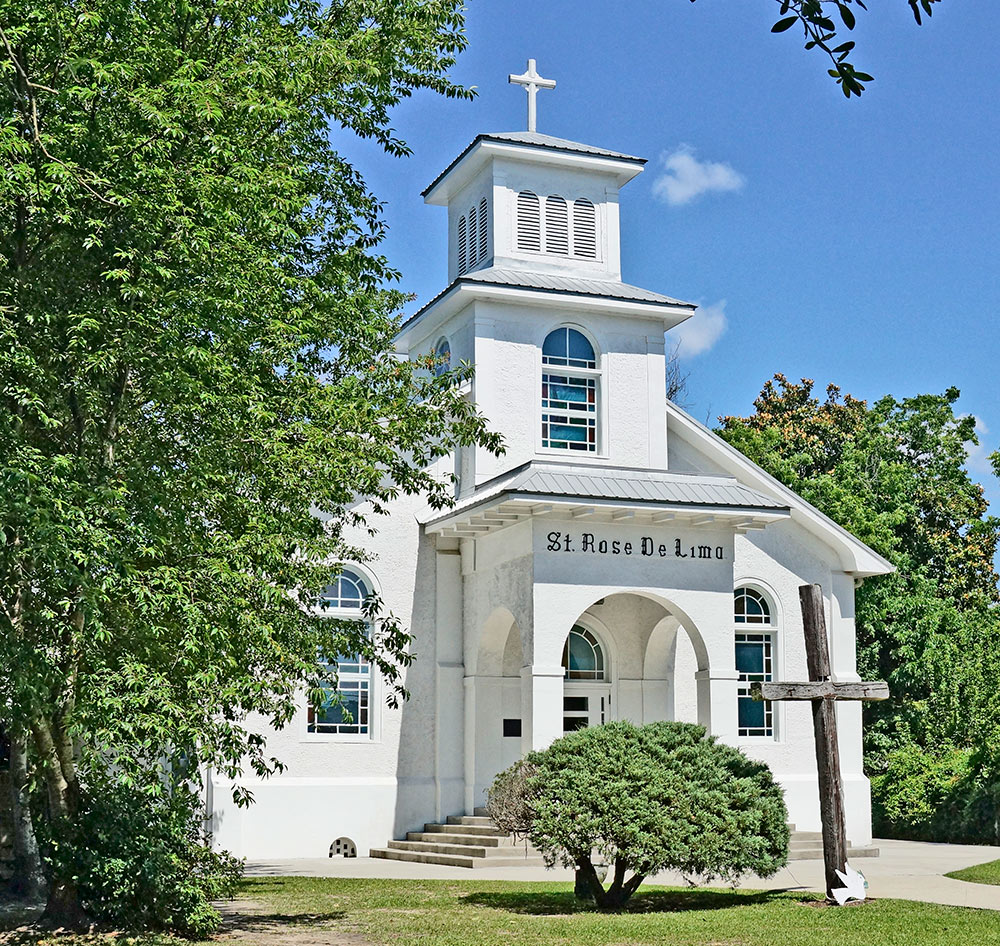 The Bay’s first school for Black children was built in 1868 and located on the site of the present-day Holy Trinity school (South Second Street).  The new school was called St. Rose de Lima and 24 children attended, taught by the Sisters of St. Joseph.  The sisters also ran the nearby school for white children, St. Joseph’s Academy.  When the Sisters of St. Joseph – who also ran the all-girls school for white children, St. Joseph’s Academy ­– were unable to run both schools, the courageous St. Augustine priests took responsibility for St. Rose and kept the school open.

In 1923, Father Baltes was appointed head of the St. Rose school. He quickly realized that the school and its community needed a parish of its own. In 1925 he moved the school to property he owned on Necaise Avenue and St Rose de Lima Parish was born. The church began construction that same year, built by "Papa" Joe Labat and its own parishioners. 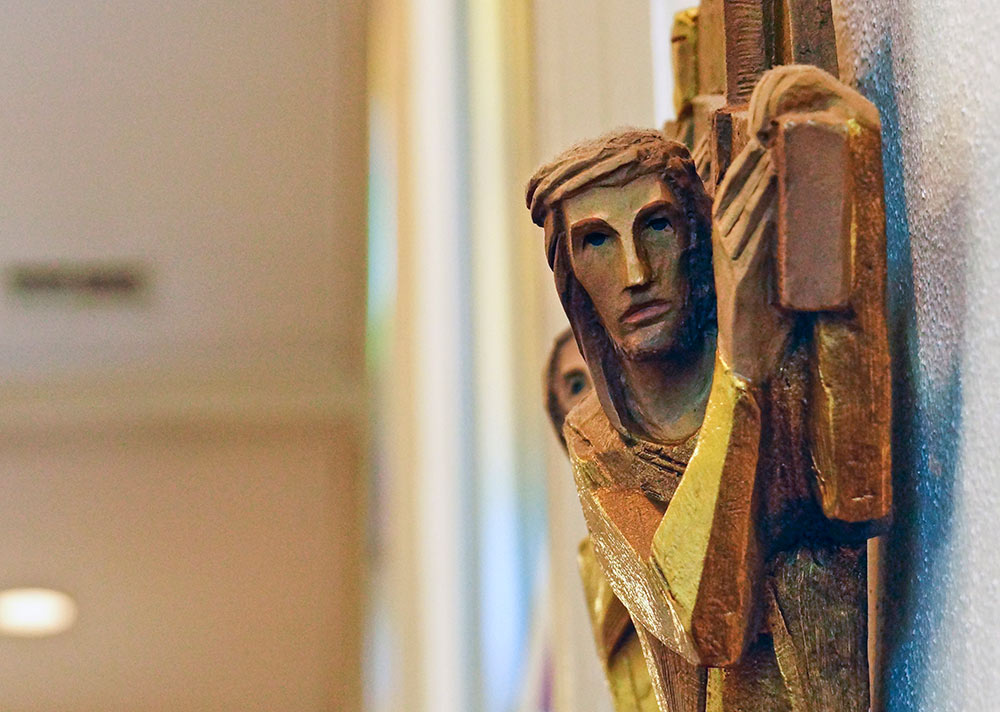 While the facade of the church and its surrounding property is lovely, the most thought-provoking moment comes when one steps through the church’s front doors. The nave is intimate and cozy, but one’s eye is immediately drawn to the powerful mural on the wall directly behind the altar.

​According to the St. Rose website, the mural created by New Orleans artist Auseklis Ozols, represents the Crucifixion and the Resurrection, with a Christ of mixed heritage. Jesus is depicted as floating next to an ornate live oak tree while wearing garments trimmed in Kente cloth. Also note the extraordinary altar carved from a rooted stump by local folk artist Ellsworth Collins.

Mass attendees are welcome to take photos inside after church services at St Rose de Lima.  Click here for service times and experience the legendary choir – and the joyful Father Agustinus Seran who always lets you know, “You’re in the right place, at the right time!” 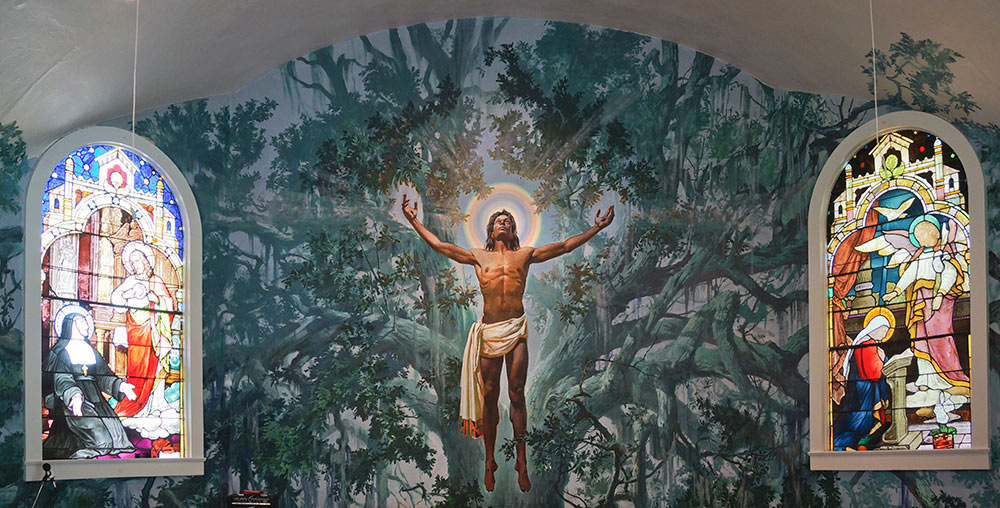 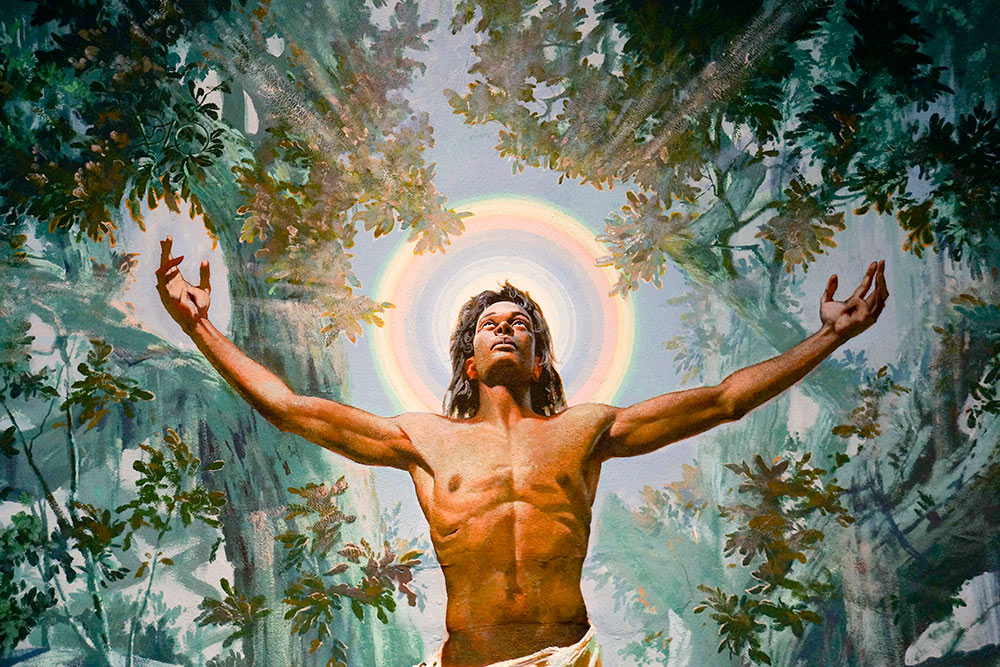 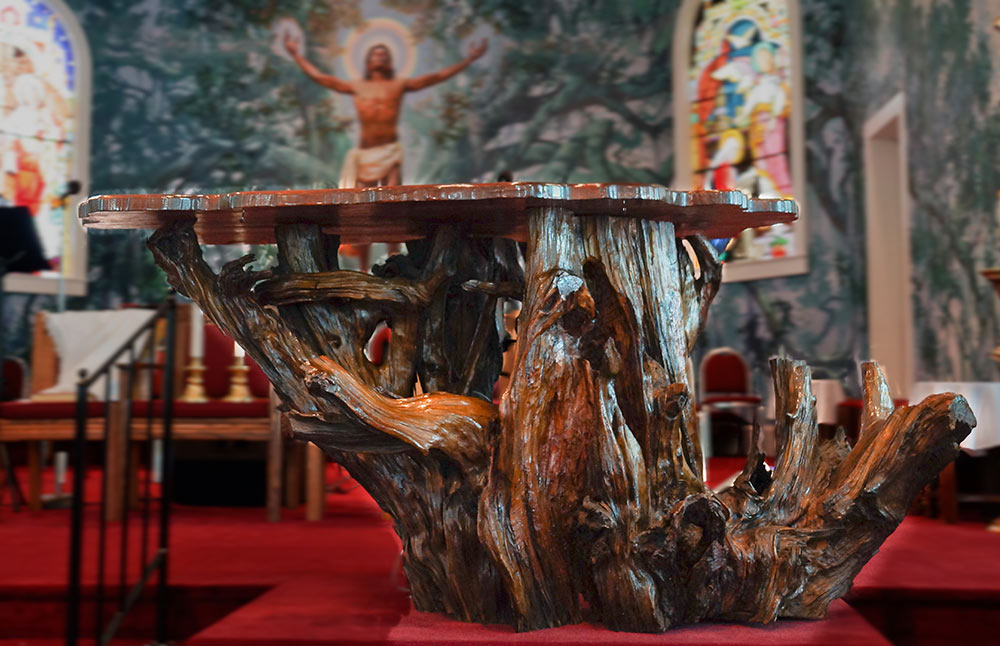 ​The venue’s slogan is “the blues stop here” and it’s spot on.  Just turning onto Union Street feels like a shift in energy. Let yourself fall back in time as you travel down the dirt road and pull up to the 100 Men Hall, with its welcoming front porch and spacious side yard. Walk to the side of the building where a vibrant visual storyboard featuring renowned and noteworthy musicians draws you into the history of the hall. 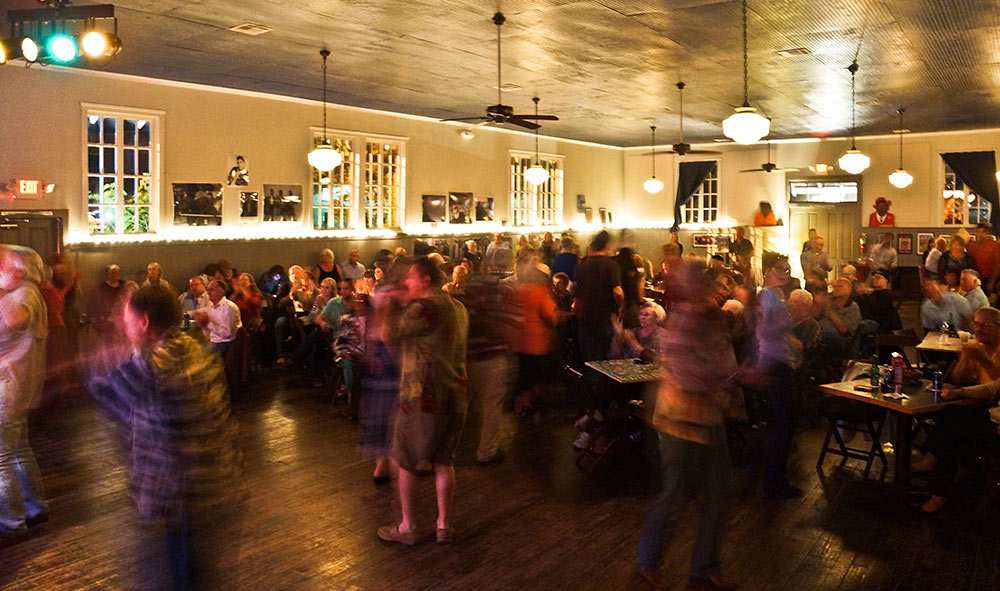 The origin of this incredible site began in 1894 when twelve community minded African-American residents began the Hundred Members Benevolent Association. The landmark circa 1922 building has hosted performances from the likes of Etta James and BB King.

​ 100 Men Hall is now owned and operated by Rachel Dangermond who works to maintain the energy of the hall and let it be a meeting place for the community. The building is one of the last remaining physical sites still left on the Mississippi Blues Trail.

If you’re lucky enough to catch a show here, you’ll understand the magic behind why this African-American landmark is so important to the Bay Saint Louis community. 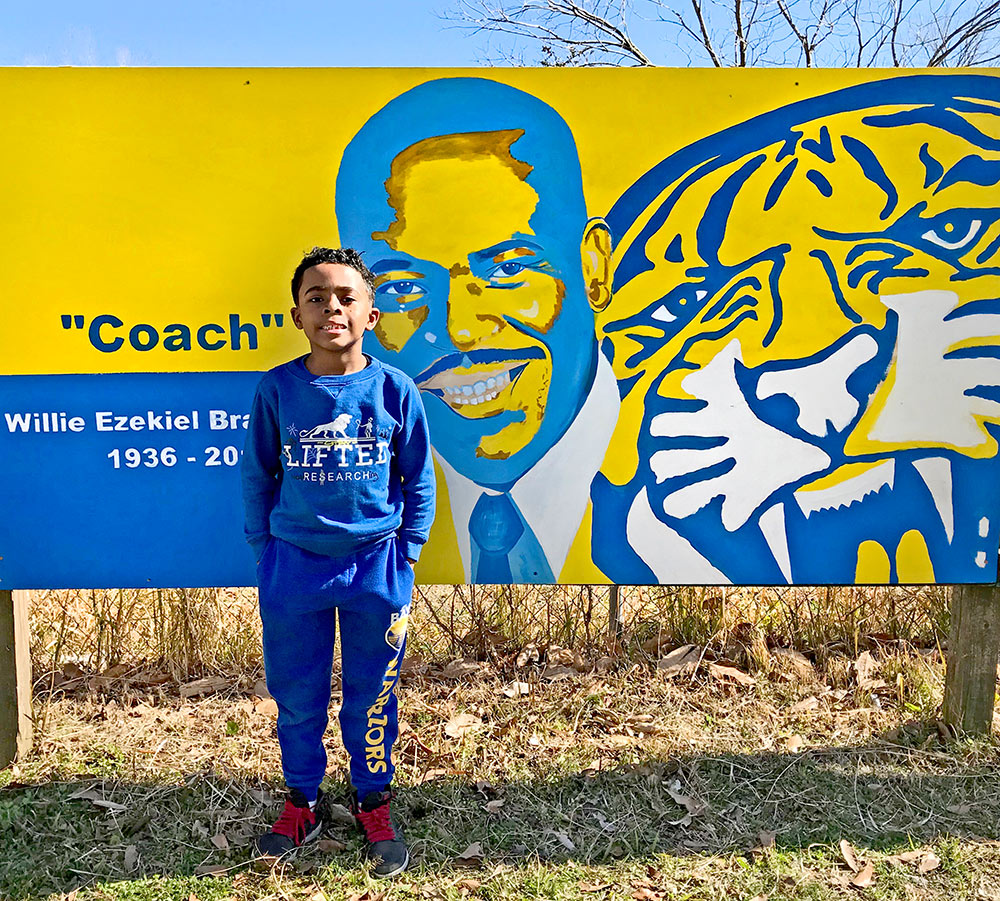 Bradley's grandson Kolton poses by the mural of Coach Willie Ezekiel Bradley, Jr.
​Wanting to create an inspirational setting for the youth of the community, a grassroots collaboration between the Hancock County NAACP and The Arts, Hancock County was formed in 2020. Their goal: to depict vibrant murals of influential Black leaders on a national level and from right here at home in Bay Saint Louis.

The first mural, completed by local artist Marian Glaser in Martin Luther King park, featured U.S. Representative John Lewis and Martin Luther King, Jr., side by side. The background imagery features the Pettus Bridge and Haisten’s Mattress sign from the “Bloody Sunday” photograph showing where Lewis was beaten by police officers during the Selma protest march in 1965. 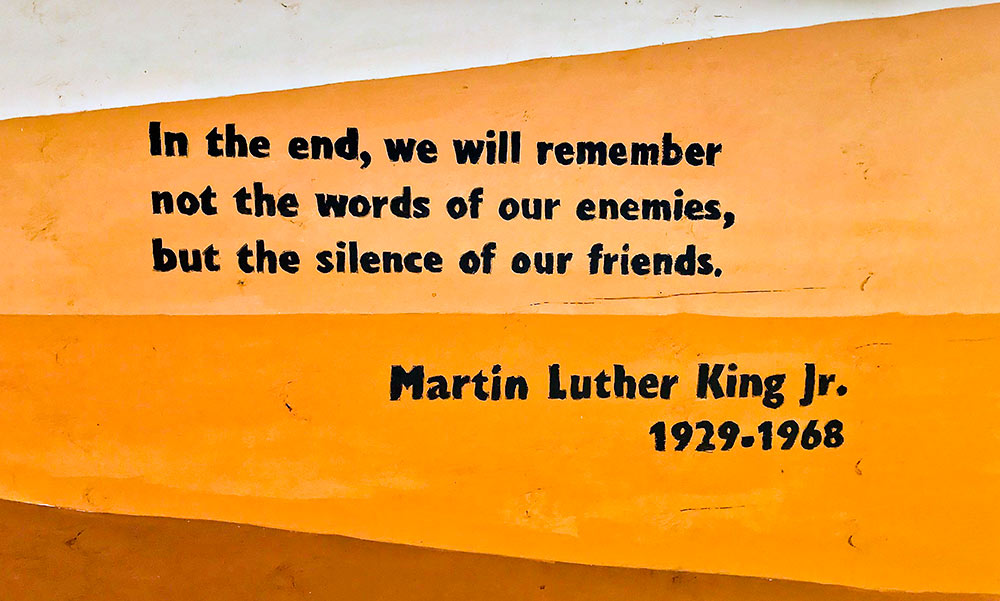 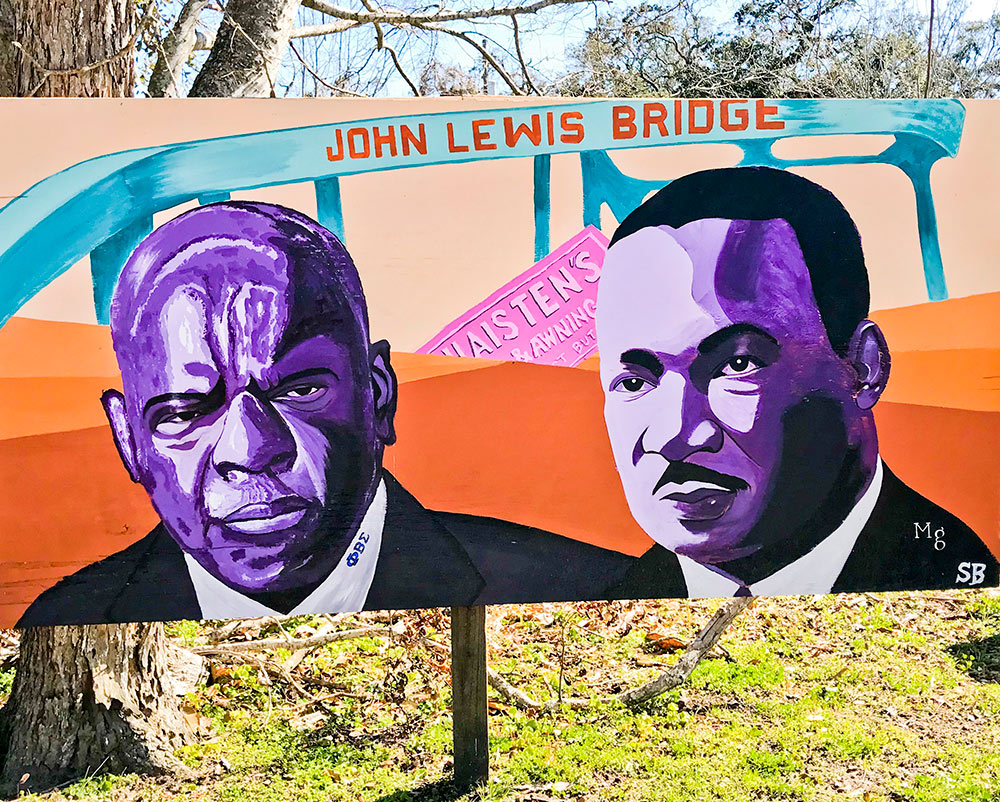 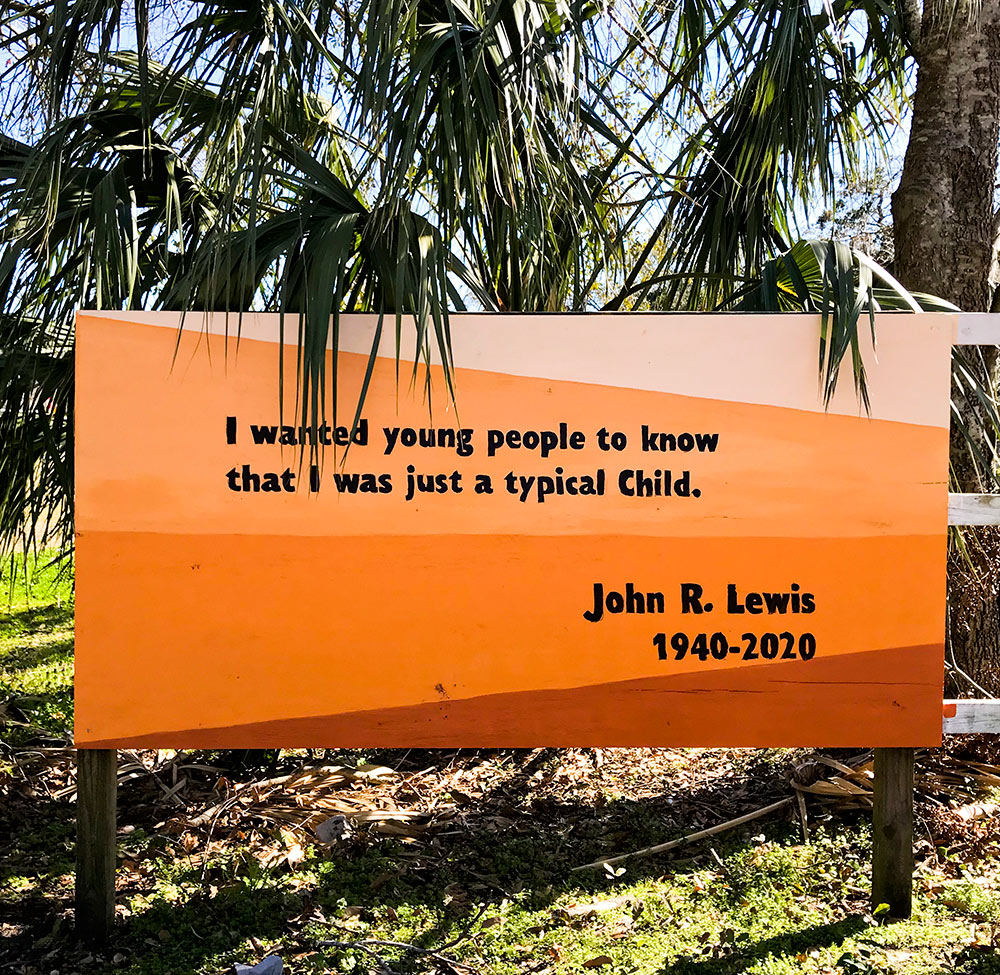 ​The second mural installation features leaders from the Bay Saint Louis community. First up is Coach Willie Ezekiel Bradley, Jr., a long-time coach and teacher within the community. Bradley began teaching and coaching at Valena C. Jones in 1960, following being honorably discharged from the U.S. Army. After integration, he went on to continue his teaching and coaching career at Bay High School until 1985. He was well known for helping struggling students.

The park is open to all during daylight hours and features a playground, basketball court, rest area, covered pavilions and barbecue grills for the community. 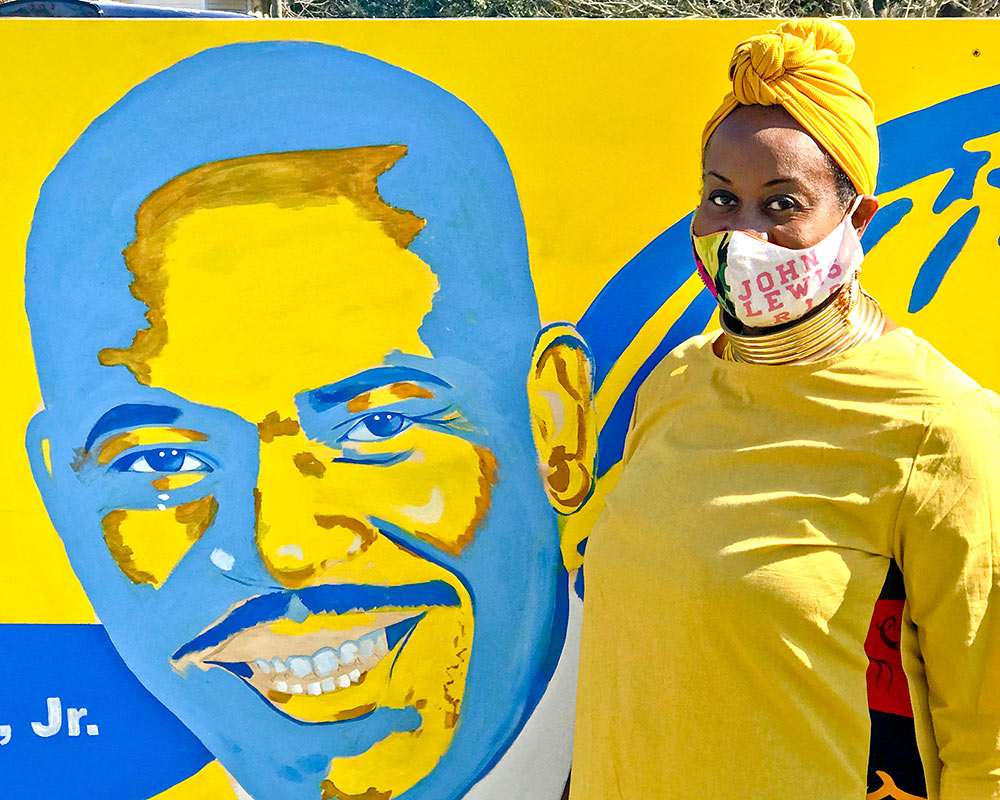 Love that the Shoofly Magazine brings you features like this without a firewall?

​We're only able to do that because of annual sponsors and readers like you. Please consider donating now! ​