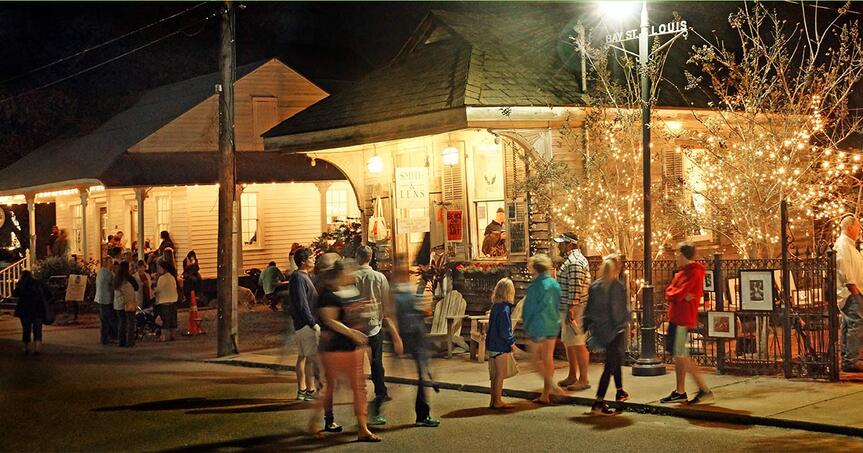 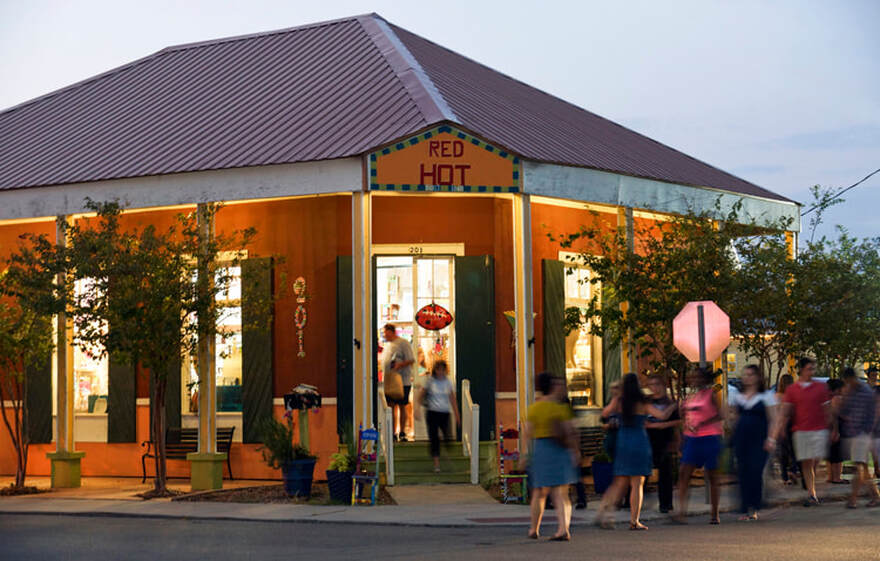 Built in 1840, only four businesses have operated in this building over its 180-year lifespan. Currently, it’s the home to the retail shop Social Chair. Owner Yuki Northington opened the shop shortly after Hurricane Katrina, recognizing a need in the community for some local retail options. Social Chair has been recognized multiple times by Mississippi Magazine as the best gift shop in the state.

Yuki eventually purchased the building and has undertaken some much needed renovations, including freshening up the original Red Hot sign over the door – McDonald’s Red Hots was the first shop to open in the building. Stop by this gem for some sweet shopping and a fun selfie while you strut your stuff for a photo you won't have to caption. 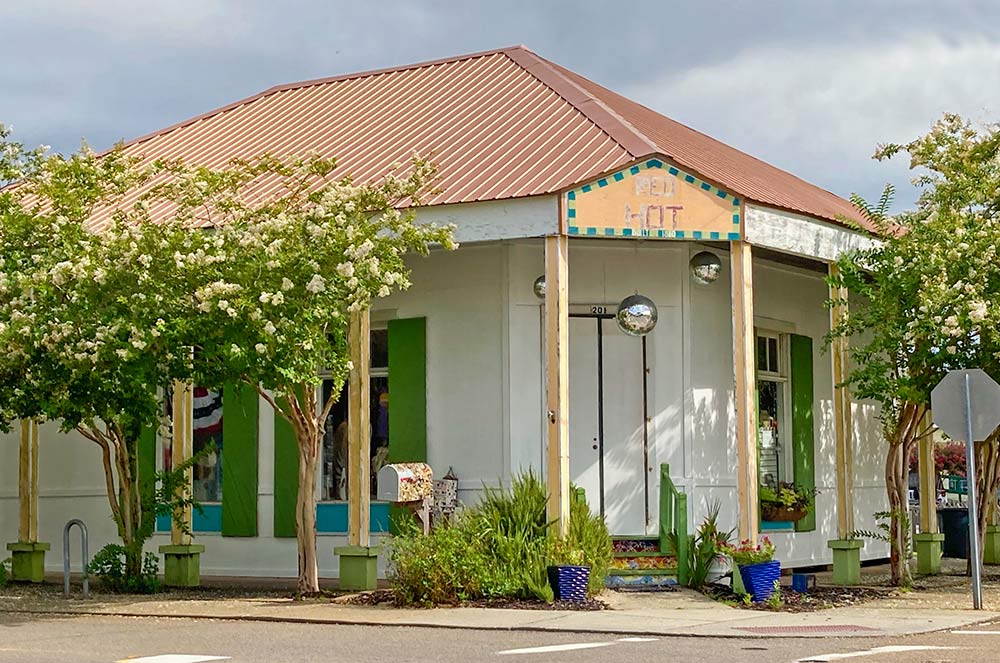 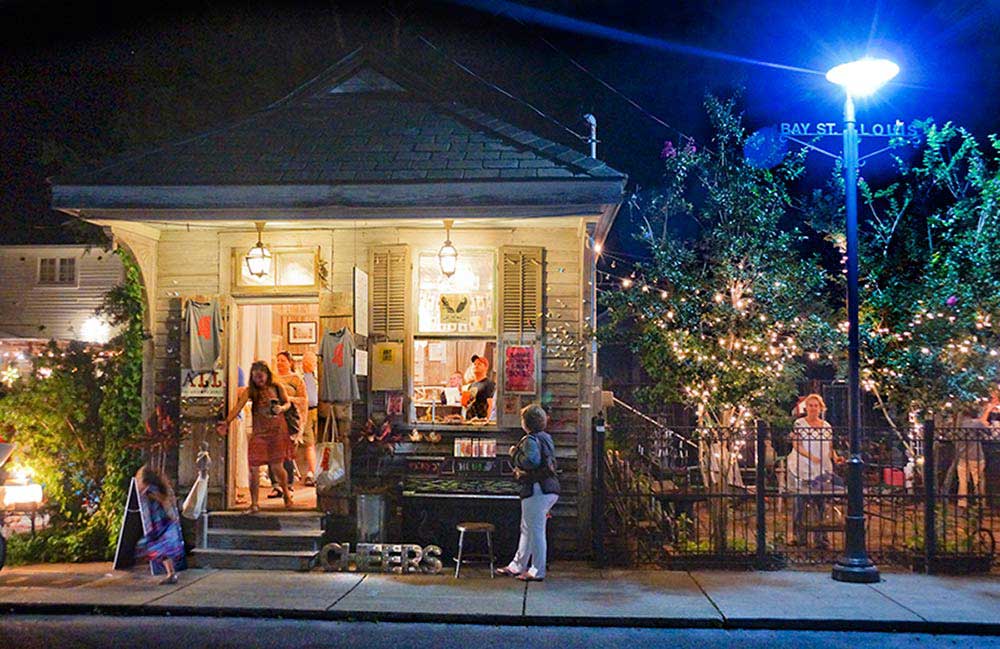 The Cobbler's Cottage
This tiny cottage is one of the most photographed places in Bay St. Louis, proving that fun things come in small packages. It seems to embody the charm of the historic district and the town’s artsy personality. Built at the turn of the 20th century, the little house served as the shop of cobbler Manuel Maurigi for more than 35 years. 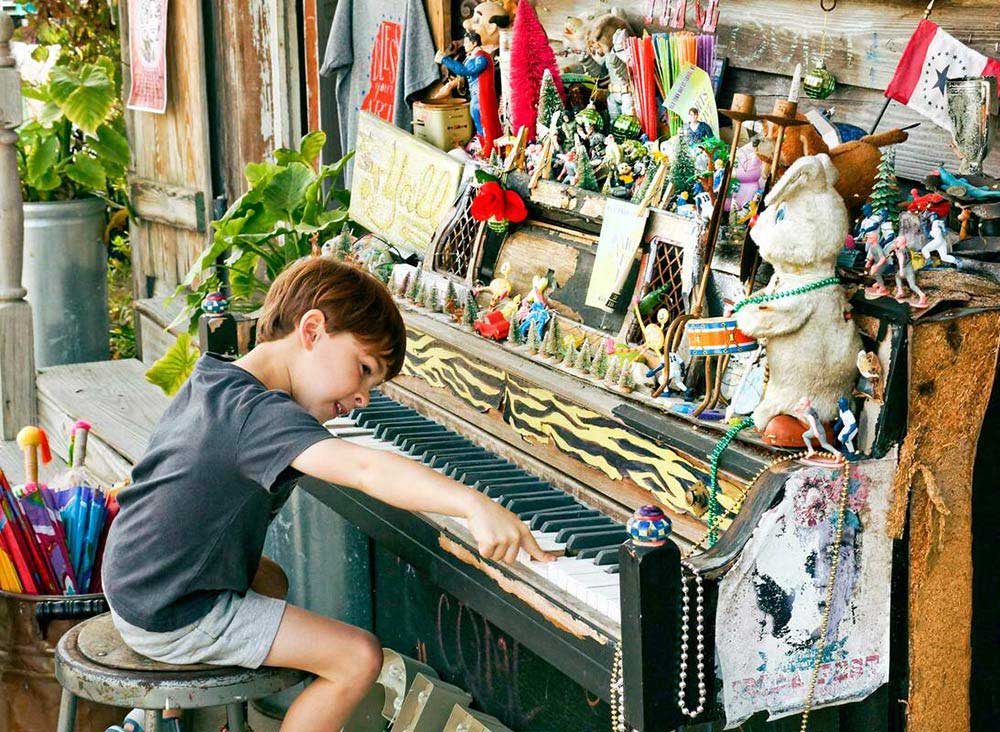 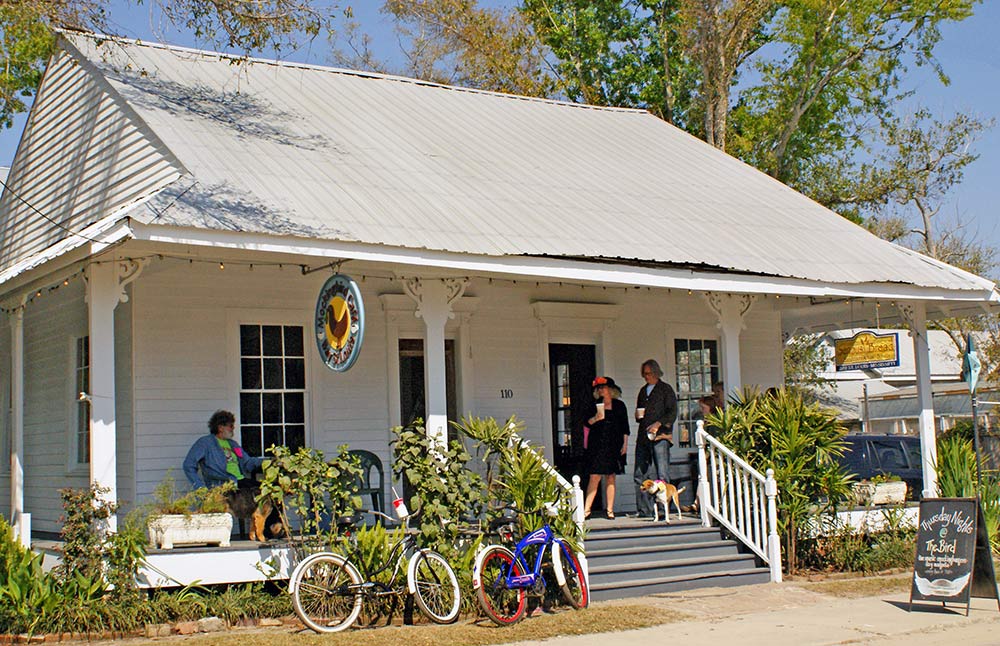 Both building and the current business at 110 South Second Street are one-of-a-kinds. It started life as a house built in 1868 by John Himes for his daughter, Eliza Weinburg. Its style was popular on the east side of the Mississippi coast in those days – in fact, it’s called a Biloxi cottage. Its signature feature is one central chimney that served corner fireplaces in the four large rooms.  Biloxi cottages are rare in Bay St. Louis and the Weinburg house is the only one in town that boasts a three-sided gallery.

The Mockingbird Café opened here in 2006, instantly being dubbed “the Town’s Living room” in the tough recovery years after Hurricane Katrina. Serving locally crafted coffee, award-winning sandwiches and homemade baked goods, the walls of the café are lined with work by local artists. You’ll find photo ops both inside and out on that welcoming porch. 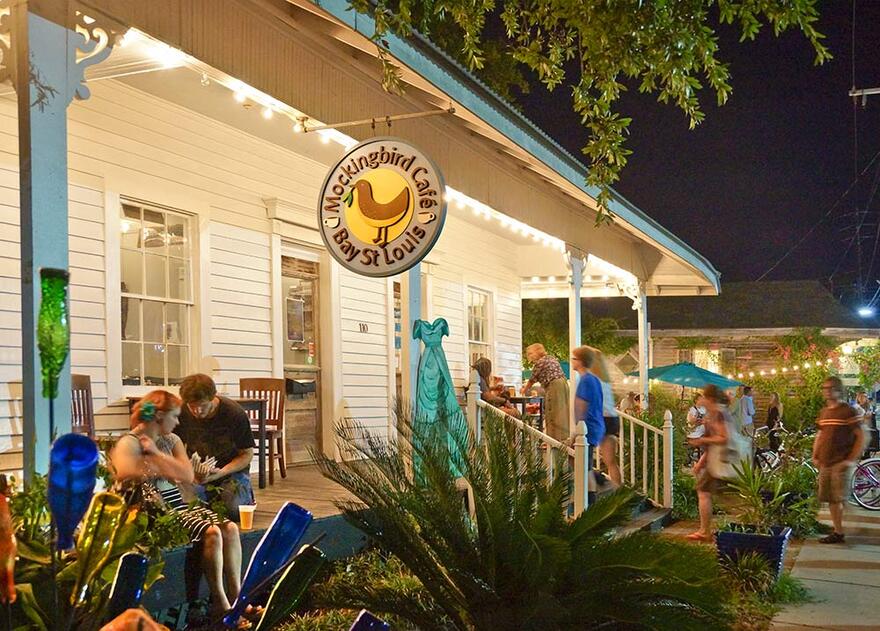 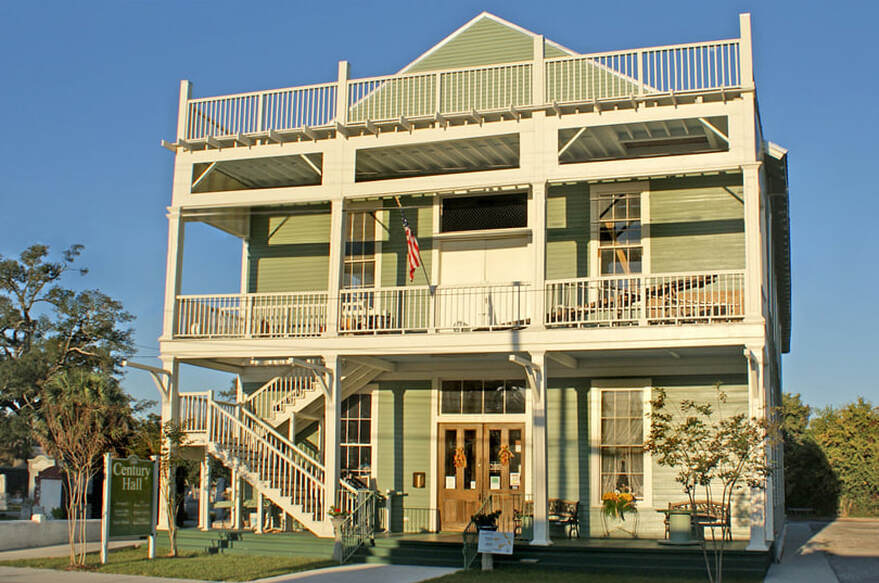 Stepping into this building will transport you back in time. Built in 1909 by the Woodsmen of the World society, this three-story structure was an entertainment center through the 1940s. Trains brought in hundreds of weekenders from New Orleans to attend balls at local hotels. After Sunday services, crowds of visitors and locals alike would gather at the Hall for plays and musical performances before heading home to start their week.

​Today, the building is now home to The Shops of Century Hall, a collective of 16 individual shops, ranging from home decor to gifts to art. Stroll through the building and appreciate the beautiful architecture, woodwork and natural light. Head up to the third floor to check out the work of local artists and get a great selfie from the balcony. You’ll also have a birds-eye view of the lovely Cedar Rest Cemetery next door, with the resting place of people from all cultures, with graves dating back to the 1820s. 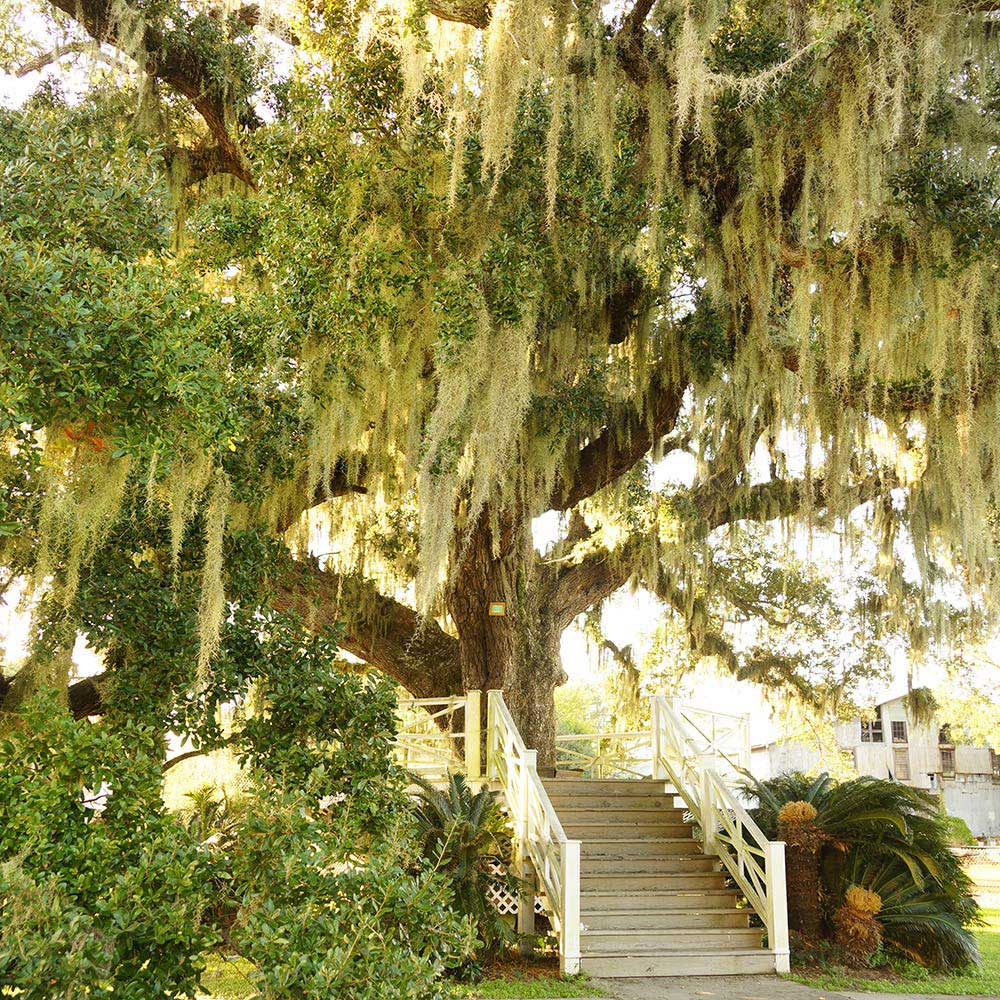 Fun fact: Our magazine gets its name from the town’s shoofly, one of the only ones remaining on the Mississippi coast. These raised “shoofly” decks built around large oak trees were popular around the Gulf Coast, allowing residents to catch the cool, fresh air off the water. The decks take their names from the French word “chaufleur,” meaning cauliflower.

The BSL shoofly was built in 1990 after three Bay women spotted one in Ocean Springs on a home tour. It was designed by architect Kevin Fitzpatrick and engineer Wayne Paterson to be self-supporting and allow the oak room to grow. 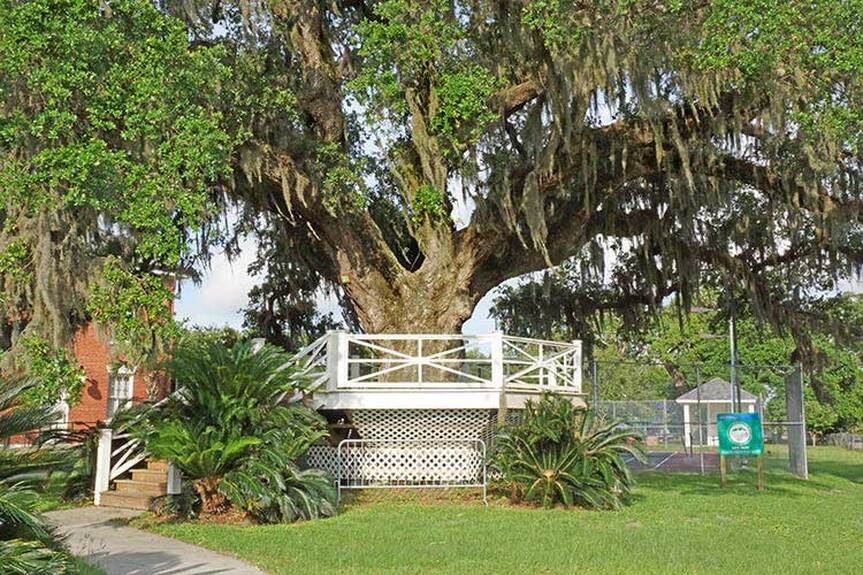 The shoofly circling the beautiful live oak next to the old City Hall building, one of only a few remaining on the Gulf Coast.
Next to the shoofly stands old City Hall. Built in 1905, this designated Mississippi Landmark (the highest architectural distinction awarded by the state) is noted for its Georgian revival style and front gabled portico. Originally, city offices were located upstairs, while downstairs were the sheriff’s office and three jail cells. Some locals believe the building is haunted, and it’s been the subject of paranormal investigations through the years. 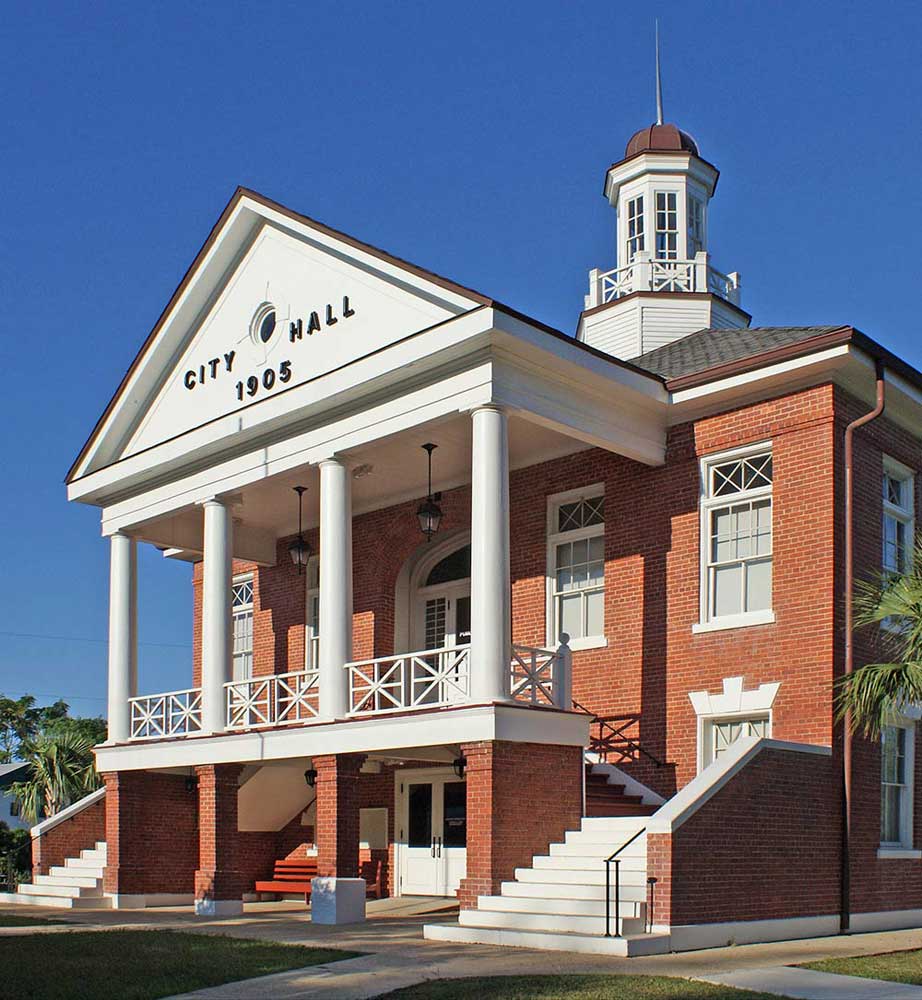 Old City Hall is designated as a Mississippi Landmark. 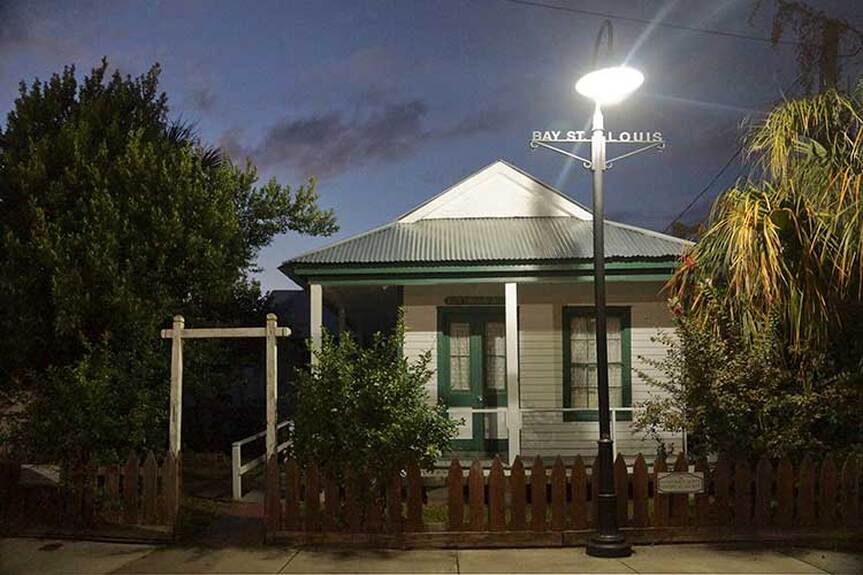 The Kate Lobrano House, home of the Hancock County Historical Society.
​Just a stone’s throw from Second Street, the single block of Cue Street runs alongside the county courthouse. The gem in the middle is a quaint shotgun cottage with a side gallery. Built as a store in 1896, it last belonged to a woman named Kate Lobrano, whose family donated it to the Hancock County Historical Society (HCHS) in 1986. Kate’s husband, Frank Lobrano, was raised by an uncle who had been a pirate with the infamous Jean Lafitte and fought in the Battle of New Orleans. Frank later developed the oyster-bed seeding process that is still used today. Read more about the couple here.

Extremely popular with family genealogists, the Hancock County Historical Society maintains an incredible library that includes more than 30,000 photographs. 150 of these are framed and hanging on the wall like windows into the past. You'll be able to buy books on local history and donate to their amazing work.  HCHS is open on weekdays from 10 am – 12 pm and 1 pm – 3 pm.
​Check out our other Instagram mini-tours of Bay St. Louis (Main Street and Beach Boulevard). And stay tuned - we have lots more planned!