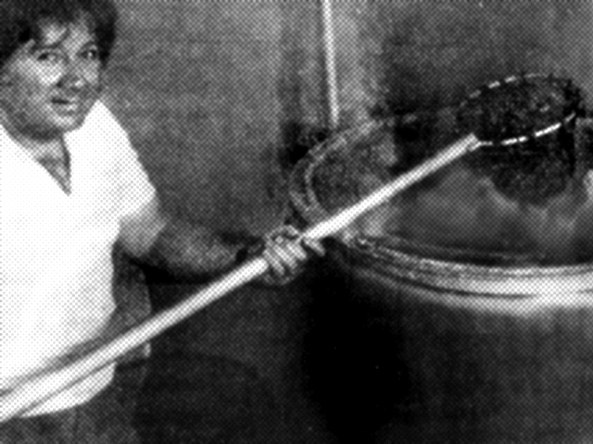 When Pearl and Fred opened Peterman’s Delicatessen in 1978, boiling was real hard work.  Fred had four boiling pots the size we might use at home to boil for the family and friends’ crawfish boil.  The volume he needed to boil to sell shrimp, crabs, and crawfish commercially, far exceeded what he could hold in those four pots.  So the drill was maybe four or six separate boils for each of his four pots.  Fred made an intense investment in labor and time.  He was boiling every day, all day. One day boiling crawfish; next day shrimp; next day crabs.  Then he’d start the cycle again.

“Double, double toil and trouble;
Fire burn and cauldron bubble…
Like a hell-broth, boil and bubble.”

But I digress.  So how did Fred go from four pots to one?  Well, he was on the West Bank of New Orleans in Westwego picking up his Bell River crawfish and his Lake Ponchatrain crabs.  He decided to swing by Marrero and see his Dad who worked at the Celotex plant.  The plant was closing down and Fred’s father was in charge of dismantling the plant.  There was a huge pile of salvage stuff.  Fred’s dad said, “Why don’t you go over there and see if there’s anything you want.”

Fred walked over to give it a look.  Well there was a discarded paint mixing vat.  Fred looked inside it.  It was stainless steel, as shiny as a bright silver coin on the inside.  On the outside, however, it had a thick coat, nearly two inches, of paint drippings of every imaginable color, hardened onto the stainless steel.  “I may be able to make a boiling pot out of that.  Fred’s Dad said, “Well, you have to buy it.”  So Fred said, “I’ll buy it.”

His Dad wrote out a bill and told Fred to pay the guy at the guard gate on his way out.  They loaded the vat on his truck and when Fred got to the guard gate, he looked at the bill.  It said, “one pot, fifty cents.”  Fred gave the guard a dollar and said, “Keep the change.”

So the work began on the paint vat to convert it to the big time, crawfish, crab and shrimp boiling mama-of-all-pots.  Paint hardened on for years, nearly two inches thick.  How do you get that off?  Scrapping? Chipping?  A few tons of elbow grease?

Fred knew how to get the job done.  He hired three guys.  They sprayed it with lye.  Let it soak in.  Then they started scrapping.  Spray again; let soak in; scrape again; chip again. Spray; soak; scrape, chip for two or three days. Yeah, tons of elbow grease later and the paint vat was transformed into Fred’s boiling pot; as shiny on the outside as it was on the inside—like a bright silver coin.

Now Fred built six natural gas burners under the pot and hooked up to city gas.  He got a stainless steel valve built into the bottom of the pot and connected it to a drain in the middle of the floor.  Open that valve and the water drains away.  Fill the pot from the top with a hose attached to your kitchen faucet.  Boiling made simple. Hah!  Boiling is never simple.

With those six burners under that beautiful shiny pot, Fred could bring his water to a boil in about a half an hour.  Then he’d pour in his seasonings cayenne pepper and Baltimore spices.  He’d throw in his lemons, garlic, onions, potatoes let that boil for 30 minutes.  At that point he’d throw in his crawfish and boil for 8 minutes.  Turn off the fire; throw ice in the pot to stop the cooking; and let soak to absorb the spices for about 30 minutes.  With shrimp he’d turn off the fire the minute the shrimp came to a boil.  Throw in the ice. Let them soak in the spices for 30 to 45 minutes.  Crabs he’d boil for 15 minutes; throw in the ice and let soak again for 30 to 45 minutes.

The heavy duty, muscle building work started when he had to scoop them out of the pot.  As can be seen in the photo, scooping out 600 pounds of shrimp or crawfish with that scoop net, could give you enough reps to keep you in shape.  Fourteen hampers of crab would add to your muscles.  Then think about boiling crawfish one day; shrimp the next day; then crabs the next day.  Then start over.  Six burners and one little exhaust fan in the room pumping that wonderful aroma all over Waveland.  That was pretty hot and hard work.

Since the last Cleaver I ran into Pearl and Fred’s daughter Jan.  She said right after Katrina she saw Fred’s pot back by the Waveland elementary school, near the railroad tracks on Coleman.  She said there was so much storm debris she couldn’t get to it.

Who got to the pot? Looters?   Corps of engineer guys?  Debris haulers?  It’s hard to imagine that locals wouldn’t recognize the potential in Fred’s pot.  There were lots of folks around who weren’t locals after the storm.   Of course Fred never etched his name into the side of the pot so that someone could return it. It’s my guess that Fred’s pot is boiling away someplace in the county with a bunch of guys standing around, beers in hand and reciting

while they wait for the crawfish to soak up the spices.