the artist grows up... 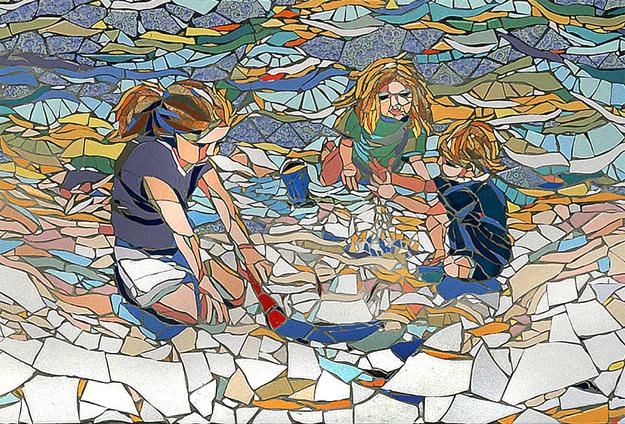 Elizabeth describes Long Beach during the 1950s as “a rural community with very open people.” She loved to dance at a place across from her school called The Busy Bee where teenagers would go to jitterbug.

Elizabeth attributes her artistic and spiritual love of water and sea life to growing up just a hop, a skip and a jump from the beach.

Looking at Elizabeth’s art, it’s as if the coastal landscape she knew so intimately as a child has permeated her spirit and flows easily into her work. The many public library patrons who visit the Bay library can enjoy the glittering mural that decorates an outside wall. Entitled “Renaissance—The Revival of the Community,” the mosaic is a joyful portrayal of children playing in the water, families picnicking on the beach, and everyone having an all out good time. Elizabeth made the project into a community one, holding numerous workshops to anyone who wanted to go and learn how to build a mosaic. Elizabeth and volunteers she trained to do mosaic installed the eye-catcher in 1995.  The mural survived Hurricane Katrina without injury, art testifying to the people’s ability to survive.

As Elizabeth said, “the beauty of a mosaic is that it can just be washed off after a storm.” We here in Bay Saint Louis admire that concept.

After Hurricane Camille in 1969 Elizabeth lived in Houston and El Paso. She came to love the West. She watched cactus bloom. In the high desert region of El Paso she came to know dust storms, and sand that made its way through the cracks in the windowsills.

Despite her love affair with the desert, Elizabeth says that mystically, her biggest influence is water. With blue eyes gazing into the distance, Elizabeth says softly, “Nature is my muse. Its perfection is so incredible.” She moved to Bay St. Louis in 1991 and has lived here ever since. With assistance from the Mississippi Arts Commission, she has spent years traveling the Magnolia State, visiting public and private schools to teach students how to create a mosaic.

Elizabeth discovered mosaics almost by accident. Living in Nashville, Tennessee in 1979 and working in Centennial Park, Elizabeth volunteered to help with a mosaic installation being built at that time.

“I was so good at it, I got hired,” she smiles. Making mosaics became her passion since that serendipity moment when she first got her hands wet playing with small irregular pieces of bright shiny glass.

Elizabeth’s works adore the Gulf Coast like jewels in the sun from Waveland to Ocean Springs. By 1983 she had her first project in Gulfport and three years later, completed a work in St. John’s Parish Hall.

Her “Fallen Heroes Memorial” pays tribute to those astronauts who gave their lives in the pursuit of knowledge. Created in 2004, located in the NASA Museum at the Stennis Space Center, it’s a poignant memoir to those space pioneers.

The entrance to the popular Davis Bayou Visitor Center in Ocean Springs is adorned by a mosaic compass rose stretching eight feet from end to end.  The new bridge between Biloxi and Ocean Springs is the outdoor gallery space for a 110-foot mural: a panoramic mosaic celebrating life along the Mississippi coast. No easy task, this project took a year to complete.

Elizabeth calls herself “the go to person for hurricanes.” She created the memorial in Biloxi to Hurricane Camille; in 2006 she created a memorial after Hurricane Katrina. She was helped when Extreme Makeover Home Edition came in as “broker,” rounding up materials, supplies, and volunteers to create the project on the Biloxi Town Green on the beachfront.

Amazingly, “the whole thing was done in five days.” recounts Elizabeth. “In that joint effort, just one year after Katrina struck, we created an oasis in the middle of wreckage.”

Elizabeth has her own sun-filled gallery in Bay St. Louis to showcase her recent work.  Should you visit The Gemini Gallery, at the corner of Washington and Third Streets, you’re likely to find Elizabeth creating jewelry. She calls her newest collection, elegantly designed in black and white beads segregated by silver ones, the “Voodoo Collection.”

Her “whole lotta dog” named Max greets visitors with joyous barks and keeps Elizabeth company while she works on her creations. Her youngest granddaughter, 11-year-old Carolyn helps Elizabeth making jewelry. Carolyn is Elizabeth’s “little artist.” Elizabeth smiles with pride. “She takes after me.”

Elizabeth’s latest mosaic project will be the centerpiece for a new lobby still in the works at Hancock Medical. “The intention is to uplift the viewer.” No doubt Bay St Louis’ well-known and well-renowned mosaic artist will not disappoint.

With her optimistic nature Elizabeth “has high hopes for Bay St. Louis.”  Pausing, Elizabeth concludes “I love Bay St. Louis—the water, the beach, the people. There is an openness and freedom to be who you are and to be accepted.”