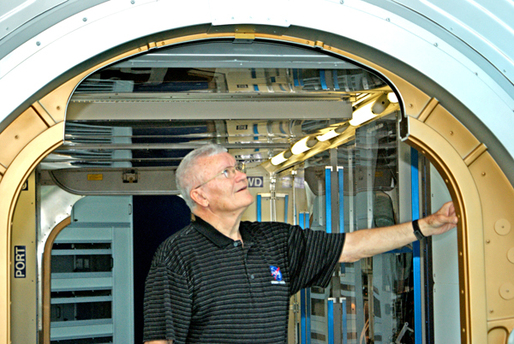 Apollo 13 astronaut and INFINITY board member Fred Haise checks out the Space Station exhibit.
“It is exciting that INFINITY is now a reality,” Gov. Phil Bryant said. “This state-of-the-art facility will ignite the imaginations of children and adults alike and will educate residents and visitors about Mississippi’s important contributions to space exploration. All who helped bring this spectacular addition to our Mississippi Gulf Coast are to be commended.”

Upon entering INFINITY, visitors are greeted by Apollo 13 astronaut—and Mississippi Gulf Coast native--Fred Haise in a special welcome video (Editor's note:  see the Cleaver's photo album this month for lots of cool Fred Haise pics). The first floor features Great Nations Dare to Explore, a 4,000-square foot maze that has visitors working their way from early Egypt to a future of colonies on Mars and moon research stations. At Science Express, visitors can see how Stennis Space Center and its many agencies contribute to scientific progress on Earth with displays such as an el Niño buoy and a digital atlas with real-time data. Next, Science on a Sphere uses animated images to showcase adventures to the sun, moon, Mars or Jupiter as well as highlight’s of the Earth’s atmosphere, including weather systems and airline flight paths.

The second floor takes visitors to the Space Gallery, tracing the history and achievements of NASA through America’s various space programs—Mercury, Gemini, Apollo and the Space Shuttle. In addition to space suits and shuttle rocket engine components, a focal point of this area is a full-size laboratory module of the international space station, featuring a video tour guided by former NASA astronaut Scott Altman. Also in the Space Gallery are a cut-away display of the Orion Crew Capsule that will carry humans into deep space and the Rocket Engine Boom Box, bringing to life the sights and sounds of a rocket engine test like those conducted at Stennis.

An outdoor exhibit area rounds out the experience at INFINITY. Here visitors can get up close to a space shuttle main engine, a tsunami buoy and weather collection buoy developed and used by the National Oceanic and Atmospheric Administration’s (NOAA) National Data Buoy Center at Stennis. Additional engines will be added to the outdoor exhibit throughout 2012.

INFINITY Science Center includes a gift shop and a restaurant offering food selections from eight different local Mississippi Gulf Coast restaurants each day, and serves as the official visitor’s center and starting point for bus tours for NASA’s John C. Stennis Space Center. Admission to INFINITY is affordably priced at just $8 for adults (age 18-54) and $6 for seniors (age 55 and above), military and children (ages 6-17). Children under age 5 are free and there is special discount pricing for groups and school programs.

INFINITY is Mississippi’s second science museum, joining the Mississippi Museum of Natural Science in the mission of bringing science to residents and visitors alike.

“INFINITY tremendously enhances the image of Mississippi,” says Apollo 13 astronaut Fred Haise, a Mississippi Gulf Coast native of national acclaim who has worked tirelessly on INFINITY. “Most everyone has heard of Kennedy Space Center or Johnson Space Center because those are where we have launched and commanded space missions,” Haise adds. “But Stennis Space Center is where this nation perfected the engines that got us into space. I bet most of America does not know that the largest rocket test facility in the United States is right here on the Mississippi Gulf Coast and has been since the 1960s. We have the world’s largest oceanographic science and research contingency right here, too.

“The goal for INFINITY is to engage and educate, to spur that sense of wonder and curiosity that took Christopher Columbus across the ocean and put me in a rocket to the moon!”

INFINITY also offers a NASA Educator Resource Center through the NASA Education Office at Stennis, providing free educational materials and professional development workshops for educators. INFINITY Science Center, Inc. has contracted with the Hancock County (Mississippi) Chamber of Commerce to run day-to-day operations of the 72,000-square foot facility, in close partnership with NASA Stennis Space Center. The facility has 30,000 square feet of total gallery space, some of which is available for conferences and special event use.