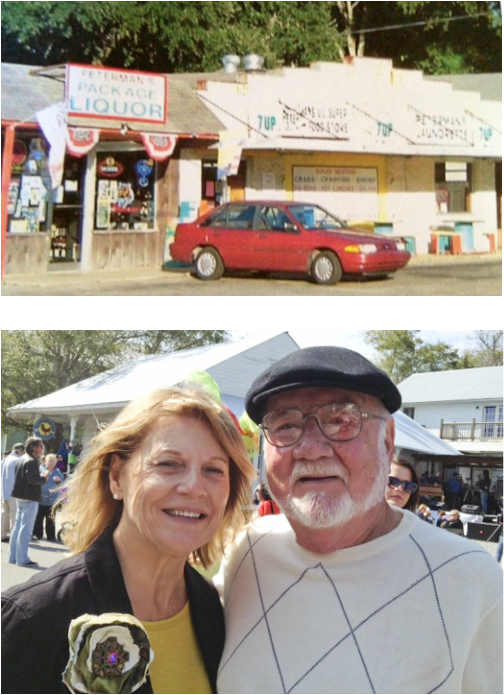 
​Peterman’s Delicatessen on Coleman Avenue in Waveland!  Anyone remember it?  I do.  Such fond remembrance of food eaten!    Pearl Peterman’s cooking and Fred Peterman’s boiled seafood.

Pearl’s plate lunches were a staple in my life from the mid ‘90’s till, you know, 2005.  Monday was, of course, Red Beans ‘n Rice, salad, and corn bread.  Tuesday was Salisbury steak, mashed potatoes and gravy, green peas, French bread.  Wednesday was smothered cabbage,   pork chops, string bean, and cornbread.  Thursday was spaghetti and meatballs, French bread and salad.  Friday was your choice: fried catfish or stuffed crabs, potato salad,   and cornbread.  Those plate lunches, at about   5 to 7 bucks a plate,   over the years from ’95 into the 2000’s, were   scrumptious.   They   were   seasoned to perfection to suit my New Orleans cuisine taste buds groomed by Mama’s cooking, from scratch, of course—the only way to cook in those days.  No take out, no frozen short cuts; no premade roux in jars!

So Pearl’s cooking in 1995 was a return to paradise for me.  I’d lived in New York for 25 years.  My tastes   were  refined  by  the famous New York watering holes of the time:  Sardi’s, Twenty-one,  The Russian Tea Room, The Oyster Bar at Grand Central Station, Tea at the Plaza, and the Waldorf Astoria’s pea soup.  Not to mention myriad ethnic restaurants.  So Pearl’s cooking definitely helped me contradict Tom Wolfe’s novel,   You Can’t Go Home Again.   Maybe you can’t  go  home  in North Carolina, but in New Orleans and the Gulf Coast, you definitely can go home again: because our Mama’s know how to cook!

How did I find Peterman’s?  On my return to Bay St. Louis after 25 years away,  a local friend gave me an orientation tour.  She stopped in front of Peterman’s, which I learned had opened in 1970 the year I moved to New York.  “Now you can eat anything that comes out of the kitchen in that little place.  That woman is a marvelous cook.”  I looked at the building.  There were three businesses: a liquor store; the deli, which was really like a localized Quick Stop grocery store with four plastic tables with seating set up between the grocery shelves;   and a Laundromat.  Each business had   its own separate entrance.  All owned by Pearl and her husband Fred.  Over the years their children worked in the family business:  Donna, Jan, Lil Fred, Melanie, Dana and Stephen.  Then the grandchildren worked: Mandy, Brennan, and Kace.  Miss Bonny, a wonderful Waveland local, cranked out the biscuits on Saturday and Sunday mornings.  One of those biscuits with your café au lait was all you ever needed for breakfast.

Well, some slightly snobbish people who shall remain nameless, chided me, “You actually eat there?”  My reply   was ,  “ As often as I can.”  Eventually, the snobbish folks got their deserved comeuppance.

One Friday, I was seated, enjoying my stuffed crab plate lunch, when a gentleman came in decked out in camo, fresh from duck hunting and Pearl said, “Justin, sit down there with my friend Liz.”  Justin sat   and looked at my plate with a  stuffed-crab- envy- look in his eye.  He ordered his own stuffed crab.

“Galatoire’s,” Justin said.  And he reached in a pocket and gave me his card.

It said Justin Galatoire Frey.  "My mother was a Galatoire," Justin explained.

Well, you know the ending of the story.  Thanks to Katrina, Peterman’s is gone—slabbed.  Not the least of our losses, not the greatest, except perhaps to Pearl and Fred.   They  live in the Kiln now.  Their children and grandchildren are still around.  Except for Stephen, he’s in Detroit playing very well for the Lions.  Fred is still wondering where his boiling pot is.  Oh, I haven’t mentioned how delicious his boiled shrimp, crawfish, and crabs were.

You see Fred had a pot that he could cook 600 pounds of shrimp in at one boil!  Or 600 pounds of crawfish in one boil.  Or 14 hampers of blue claw crabs in one boil.  Is it rolling around on the bottom of the Gulf? Has it become part of the oyster reef?  It was never found on land.  Did looters come and grab it?  If you go to a crawfish boil and see it,   please let Fred know.   He’d still love to find it.